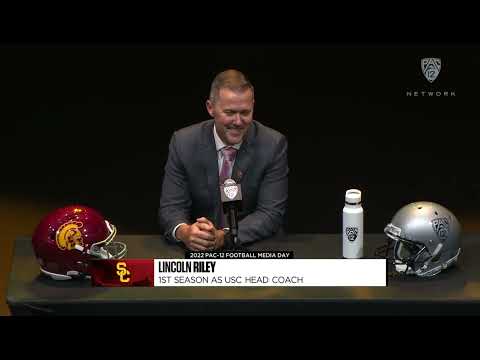 University of Southern California (USC) Trojans football program head coach Lincoln Riley has responded to accusations by a fellow coach that he tampered with the transfer of the top wide receiver in college football. Riley had remained silent about the issue until Friday.

University of Pittsburgh football head coach Pat Narduzzi accused USC of tampering with 2021 Biletnikoff winner Jordan Addison after the wide receiver transferred from Pittsburgh to USC during the offseason.

In his first Pac-12 media day as USC coach, Riley addressed the accusations made by Narduzzi last April.

“When someone challenges that with no facts and only emotion, do you take it personally? Absolutely you do,” Riley said. “I understand this is an emotional time. It’s an emotional game with a lot of emotional people. We recruited Jordan just like we did every other transfer."

In addition, Riley explained that Jordan had entered the transfer portal.

"Jordan came on a visit to USC. Despite all the negative things that were put out magically by somebody, he’s a kid that’s all about ball,” he said.

ESPN reported that Narduzzi called Riley several times in late April to express his discontentment with the coach. He insisted Addison was recruited before his official NCAA transfer on May 3.

Several million-dollar NIL deals were rumored to be waiting for Addison at USC. It was widely expected that Addison would commit to USC on May 19 after visiting both Texas and the Trojans.

“All he wanted to do his entire visit was talk ball,” Riley said. “We literally missed several of the meals and entertainment we had scheduled just so we could watch more film and talk more ball. That’s all he’s about. I think he’s been really, really misrepresented throughout this whole thing.”

There was a suspicion that his arrival was related to a promised paycheck. Fellow USC transfer Caleb Williams joined his coach on Friday to confirm that the accusations were false.

Addison and Williams share a bond since both grew up in the DC area. The two laughed over Addison’s rumored $3 million payday.

“It wasn’t about NIL for Jordan,” Williams said. “That was one of the biggest things. People thought it was about NIL. Guys on the inside knew that it wasn’t. Jordan wants to win. Jordan wants to be the best receiver—no offense to any other school.”

Williams admitted to pestering Addison throughout the process, trying to persuade him to sign with them.

“It was like 15 of my teammates that I had text Jordan,” Williams said. “I was like, ‘Guys we’re going to need him to go win some big games.’ That’s how important Jordan was.”

The arrival of the star receiver has invited various responses, including from Pac-12 commissioner George Kliavkoff. During the spring, that arrival was more controversial than confidential.

Addison has garnered praise from his new team. Riley referred to him as a "proven playmaker", while Williams dubbed him “the fastest receiver on the team”.