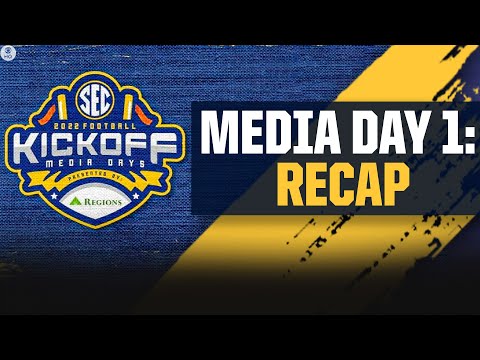 The first day of SEC Media Days was officially in the books, and it featured a variety of topics that caught the attention of college football fans. Commissioner Greg Sankey delivered his "State of the SEC" speech, which tackled various issues, including conference expansion.

Following Sankey's speech, the media began talking about the upcoming season. First-year coaches such as Brian Kelly of Louisiana State and Eli Drinkwitz of Missouri were among the first to address the media.

Sankey is a powerful individual in college football, and he used his speech to set the tone for what's to come in the league's future. Many of the topics he addressed during his 30-minute remarks were related to conference expansion.

Although the SEC is not planning on expanding beyond Oklahoma and Texas, it's still expected that both schools will join the league for the 2025-26 academic year.

The commissioner also stated that adding a group of six or eight teams to the College Football Playoff would not be on his mind.

The league is still planning on having no divisions when Texas and Oklahoma officially join the league. However, tiebreaker scenarios have become a problem.

Sankey also stated that he would like the US Congress to work on developing regulations that would standardize the use of specific terms and images in college football.

After the fall camp season, Kelly's first order of business is to find a starting quarterback. He brought in three-year starter Jayden Daniels from Arizona State and converted former Louisiana-Lafayette quarterback Myles Brennan to the Tigers. He also has two other young signal-callers in Walker Howard and Garrett Nussmeier.

During his press briefing, Kelly stated that he felt that the team has a good depth at the quarterback position. He noted that the spring practice was focused on laying down the offense and not on a specific skill set.

"I think the depth at the quarterback position is much different. Jayden and certainly Myles bring us obviously starting experience. Garrett obviously for me is an exciting quarterback. Walker is a true freshman, but there's great depth there," said Kelly.

According to Kelly, the most critical factors he considers when choosing a starting quarterback are the player who can take care of the football, the ability of his receivers to extend plays, and the power of his offensive line to block. Since 2014, Kelly has had a quarterbacks rush for at least 200 yards each season. Since he could sign Daniels, he is the only one of the four quarterbacks that fit this bill.

Kiffin believes NCAA should adopt a uniform set of rules

The various changes in the game over the past couple of years have made it difficult for coaches and programs to implement effective strategies. Lane Kiffin, the head coach of the Arkansas football program, delivered a quick response to a question during his press briefing.

Kiffin made it clear that he believes that the NCAA should adopt a uniform set of rules regarding recruiting players. The issue of the differences in the NIL laws between states has been a significant factor that led to the spat between Jimbo Fisher and Nick Saban of Texas A&M.