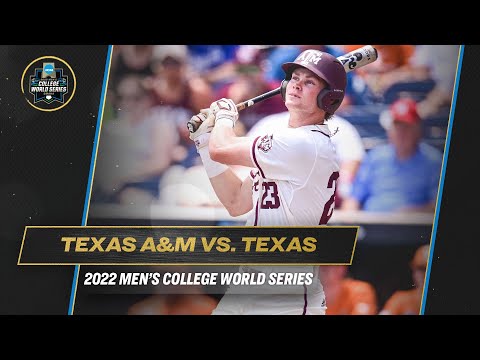 The Texas A&M Aggies eliminated fellow state rival the Texas Longhorns from the College World Series by posting a thrilling 10-2 win on Sunday.

The Aggies successfully restrained the Longhorns from adding more points beyond the second inning. Aggies third baseman Trevor Werner registered a tiebreaker in the inning.

Winning over the No. 9 seed Texas propelled the No. 5 Texas A&M to the next elimination game against the Notre Dame Fighting Irish on Tuesday this week. Meanwhile, the four other CWS teams such as the Auburn Tigers vs. Stanford Cardinal and the Ole Miss Rebels vs. Arkansas Razorbacks will play on Monday.

Sunday’s matchup between the two great Texas rivals began with the Longhorns taking over the early-game lead in the first two innings. Texas designated hitter Austin Todd smacked a single to the left, and center fielder Douglas Hodo III scored. Both of them were followed by left fielder Eric Kennedy.

Hodo returned in the following inning with a double to the left, and sophomore Dylan Campbell registered a score for the Longhorns.

In the second, Texas was unable to contain Texas A&M. Right fielder Brett Minnich made a double to the far left, and second baseman Ryan Targac scored.

The Aggies batting offensive department demonstrated a stellar display. Not only did the team close the scoring gap in the inning, but they also added two additional points. Werner made a single, while both Minnich and Thompson each scored a single point.

The Aggies continued to dominate the remaining innings, not allowing the Longhorns to recover.

“There is a little extra oomph behind everything, especially when it’s Texas because you just look at the fan bases, there’s a lot of like genuine hate between each other,” Dallas said.

“We kind of feed off of it. We respect them. They’re a great ball club. But there’s a little more, I don’t know, competition.”

The matchup was not picture-perfect for the Aggies. The team had a stressful situation when Longhorns batter Ivan Melendez came in after pitcher Jacob Palisch walked pinch hitter Mitchell Daly with two outs. Palisch struck out Melendez.

“That was a massive part of the game,” Aggies coach Jim Schlossnagle said of Palisch who walked off the mound after replacing four batters earlier.

For the Longhorns, the defeat was unfortunate. Todd, who was responsible for the team's early-game 1-0 lead with his single RBI, seemed limited from adding more points beyond the first inning.

“We all had the same goal, and that was to have a dog pile at the end,” Todd said. “I don’t think it’s really truly hit me yet. We fight for this and this is everything that we worked for. It’s just one of those things that we didn’t get it done today.”

While the road for Texas has ended this year, Texas A&M will play the Fighting Irish this week. Notre Dame just returned fresh from a forced defeat on Sunday by Oklahoma 6-2. Aside from the two, Auburn and Stanford will be playing an elimination game on Monday.