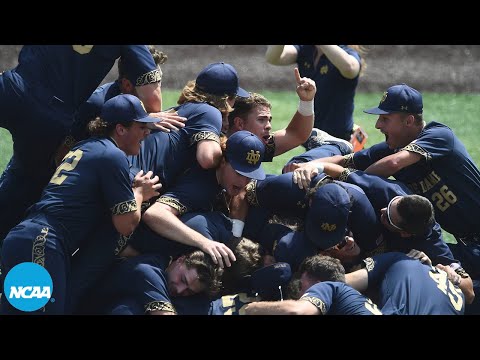 The Notre Dame Fighting Irish knocked the country’s No. 1 team off this year’s World College Series after winning Sunday afternoon’s matchup against the Tennessee Volunteers with a margin-wide score of 7-3.

The Fighting Irish bounced back from their disappointing Game 2 12-4 defeat that almost had the Volunteers claim the Knoxville Super Regional title and make their sixth College World Series appearance.

Things look promising for Notre Dame as the program is heading to Omaha for the final leg of the tournament for the first time in 20 years.

Game 3 showed Notre Dame’s late-game dominance over the most controversial, yet entertaining, team this season. Tennessee had the early-game upper hand but lacked most in managing their defense. Moreover, the Volunteers’ dominance only got them as far as hitting a single point each in the early innings.

Volunteers first baseman Luc Lipcius smacked a homer off to the center in the first inning. Notre Dame did not make any score until the second when catcher David LaManna grounded out to a shortstop. Designated hitter Jack Zyska then followed up with a single point to score for the Fighting Irish.

Shortly after, Tennessee took over the lead to 2-1 via left fielder Seth Stephenson, who smacked a single to the left to teammate second baseman Jorel Ortega to register a score. Stephenson was the team’s key offense since he was responsible for posting two of the biggest hits and a pair of RBIs for the Volunteers.

Stephenson would return his outstanding play in the fifth inning with a double to the left. Shortstop Cortland Lawson also scored, extending the lead to 3-1.

Starting from the seventh inning, Notre Dame retaliated, back posting double threes in the seventh and eighth innings.

In the seventh, LaManna made his home run to the right, and first baseman Carter Putz scored. The duo managed to tie the game to 3-3. Not long after, Tennessee pitcher Chase Burns displayed a poor pitching performance in the inning when Notre Dame third baseman Jack Brannigan was batting.

The ill-fated pitch by Burns had Brannigan hit a successful homer far to the left-center, sending the team to lead 4-3 over the Volunteers.

In the eighth, Putz returned to hit a double to the right-center, and right fielder Brooks Coetzee and left fielder Ryan Cole each scored. The Volunteers trailed three points behind in the inning.

Before the game finished, Zyska and Putz sealed the team’s ticket to Omaha. The former singled to the left and the latter managed a score.

"Notre Dame will get to Omaha and enjoy that and probably do some damage," Volunteers coach Tony Vitello said. "It's a really tough group. What needs to stick with our guys, once time passes—What do they say? Time heals all wounds? I don't know who 'they' are, because sometimes those take a long time."

The Fighting Irish will be joining College Station winner Texas A&M Aggies and Chapel Hill victors Arkansas Razorbacks in the World College Series among others.

"We've battled and fought for years to get to this moment," Fighting Irish coach Link Jarrett said.

"Those are just exceptional human beings. They grasp what's going on in the competition, they go do it, and to think this moment would be with a freshman finishing the most critical game, quite frankly, in the history of the program in this venue against that team."