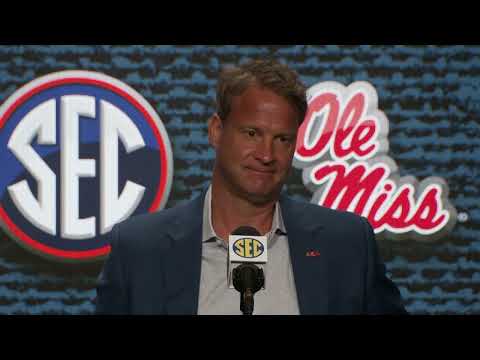 Lane Kiffin and Alabama have a special relationship. From his time as an offensive coordinator at Tennessee to his time as the head coach at Ole Miss, he has been involved with the program in various ways. Whether on social media or in a news conference, he rarely avoids discussing the team. One of his biggest hits is his take on Nick Saban.

During the opening day of SEC Media Days, Kiffin was asked about the team's trick play philosophy and how he learned from Saban. He didn't hesitate to answer the question, though he delivered a measured response.

Kiffin referred to former Alabama coach Kirby Smart, who said he would often talk about the team.

"Well, Kirby Smart used to say sometimes you come up here and just talking about Alabama," said Kiffin. "So our first question somehow is about Nick Saban, so... That's pretty usual."

Kiffin's reminiscing his time with Alabama

The 47-year-old coach also talked about his time as the offensive coordinator at Alabama from 2014 to 2017. Throughout his time with the program, Kiffin developed a strong relationship with the players.

During his time at the podium, Kiffin referred to either Alabama or Saban multiple times. The importance of holding coaches accountable is something that's part of the work of SEC media days.

When asked about the changing recruiting landscape, Kiffin referred to his old boss. He was referring to when he took pictures with his new Rolls-Royce cars.

A reporter then asked about the times Ole Miss would go for it on fourth downs instead of a field goal. During his closing statement, the 6-foot-3 coach referred to the team's last two games against Alabama. He said that everybody was saying they were great but would not be successful the following year.

"The first year we play them, we make a bunch of them, and everybody is saying, That's great. The next year we don't. Then you got to go to that press conference," the coach said.

Another reporter then asked about the various conferences that have changed, and one of the topics that immediately came up was the SEC. Kiffin said that the conference's success was due to the players' decision to transfer from the West Coast and the Northeast. He referred to the fact that the players from the two regions were starting to arrive at the SEC due to the league's success.

"Said it for a long time: the SEC just means more," Kiffin said, nailing the SEC slogan. "And it does. It's different, it's ahead of the game. Now, over the last five, ten years, the players started coming that didn't used to come from the Northeast and West Coast very often at all. That transition I feel like started with Alabama especially, and now they're coming to the SEC."