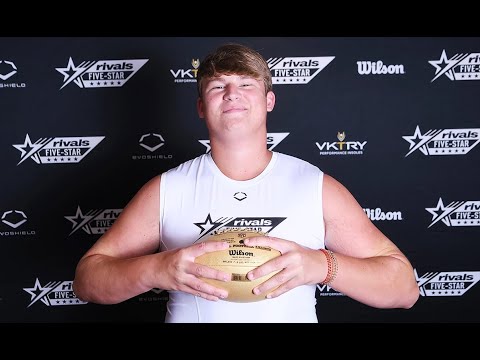 He will be joining the program’s class of 2023 as the fifth member. The young offensive tackle is the third three-star talent on Crimson Tide head coach Nick Saban's squad for next year. Multiple reports claimed that Formby would be tasked with blocking for quarterback Eli Holstein.

According to 247Sports’ Composite Rankings, the Tuscaloosa native is a No. 83 overall player and the No. 10 offensive tackle in next year’s class.

As mentioned above, Formby is the fifth member recruited into the 2023 class so far. The other four are Holstein, edge rusher Yhonzae Pierre, and defensive backs Jahlil Hurley and Elliot Washington.

The young OT has been quite a regular visitor in Alabama. Prior to his official visit on June 10, the program sent him an offer to play in January this year. He also reportedly visited the campus several times before.

“They develop great players and great athletes, but not only that, they develop you outside of football as well,” Formby said. “They’re always surrounded by great coaching and stuff like that.”

“I’ve known Coach Wolf for longer than a year now, and I have a really good relationship with him,” Formby said via BamaCentral after his official visit to Alabama two weeks ago.

“He’s a really cool coach. He’s a great coach, very intense which is what you want. He has a great personality on and off the field.”

In total, Formby received 33 offers and had four visits since late April.

“Displays good athletic ability at the right tackle position. Appears to have natural knee bend and hip flexibility. Demonstrates good foot and body quickness off the line of scrimmage and plays with some suddenness,” Petagna wrote.

“Exhibits above-average foot quickness in pass protection and shows the ability to anchor in his pass set. Possesses good play strength at the point of attack, showing the ability to move defenders naturally off the line of scrimmage. Possesses the ability to finish and sustain blocks. Has some nasty to him.”

Now that the four-star offensive tackle has pledged his allegiance to the Crimson Tide, the program will likely target other prospects, two of which in particular, are offensive tackles—namely, Thompson High’s Stanton Ramil and Thayer Academy’s Samson Okunlola. The duo seems to have piqued Alabama’s interests the most compared to other prospects on the recruitment list.