Kenny Atkinson turns down Hornets to stay with Warriors 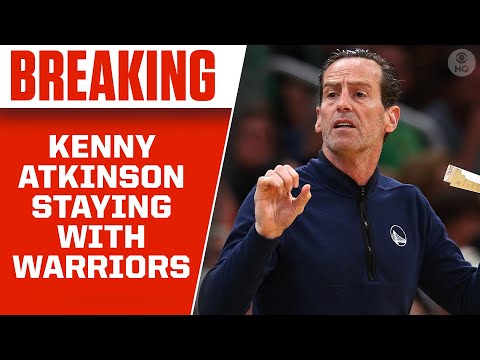 The Charlotte Hornets will have to start looking for a new head coach again because Kenny Atkinson, who reportedly agreed to a four-year agreement with Charlotte, has changed his mind. Atkinson will remain with the NBA champion Golden State Warriors.

Two sources told The Associated Press on Saturday that Atkinson will stay as a Golden State assistant coach instead of moving to the Hornets. Neither Atkinson nor the Hornets shared details of the discussions or agreement publicly. Steve Kerr, the Warriors coach, wouldn’t discuss it until the Hornets hire Atkinson.

More than a week ago, Atkinson agreed to a four-year-long contract. However, one of the sources said the agreement was never signed.

ESPN was the first to announce that Atkinson had decided not to take the position in Charlotte. With his decision, Charlotte joins Utah as the only NBA team without coaches.

In the upcoming Draft pick, the Hornets will have three selections, including two in the top 15, and Charlotte may be forced to make the No. 13, 15, and 45 picks without a head coach beforehand.

Before the championship parade on Monday, Golden State’s players conducted exit interviews. They were "glad" that Atkinson had chosen to join the Warriors in pursuing another championship after Thursday’s Game 6 victory against the Boston Celtics.

“That means a lot,” forward Andrew Wiggins said. “He gave up a head coaching job to come back.”

Atkinson’s career over the years

Before arriving in San Francisco, Atkinson was the head coach of the Brooklyn Nets. His time in Brooklyn reportedly ended after a fallout with Kyrie Irving, which resulted in the parties agreeing to split from each other.

Atkinson went 118-190 in three seasons as head coach of the Brooklyn Nets during their rebuilding period. He has spent the previous two seasons as an assistant coach, first with the Los Angeles Clippers and now with the Golden State Warriors.

“We knew the amazing job Kenny did when he was in Brooklyn. That doesn’t get talked about enough,” guard Jordan Poole said.

“For him to be able to bring all of the knowledge and the insight and the positive emotion and militaristic drive that he has, to already add that to a winning culture is amazing. And we got a ring because of that," Poole continued.

"He obviously is extremely invested and believes we can do it again. You want guys like that and people like that," he concluded.

Some say part of Atkinson’s reluctance to leave Golden State may be because he is projected to become the team’s next head coach.

Meanwhile, Kerr recently discussed his retirement plans and had just won his ninth NBA title. He has nothing left to prove, therefore, he may pass the reins on to Atkinson in the near future.

The Hornets never announced Atkinson’s hiring, as Charlotte had not finalized the deal, and the Warriors were still playing. Mike Brown, another Golden State assistant, is departing to become head coach in Sacramento.

The Hornets interviewed numerous other candidates in their attempt to replace James Borrego, who was fired at the end of his fourth season in April due to the team’s poor defense all season long.

In addition to Darvin Ham and Mike D’Antoni, there was a rumor that Terry Stotts was a potential target for Charlotte. Ham was hired as a Los Angeles Lakers coach. It’s still unclear if D’Antoni or Stotts are still interested in Charlotte or if the Hornets plan to approach them again in the future.