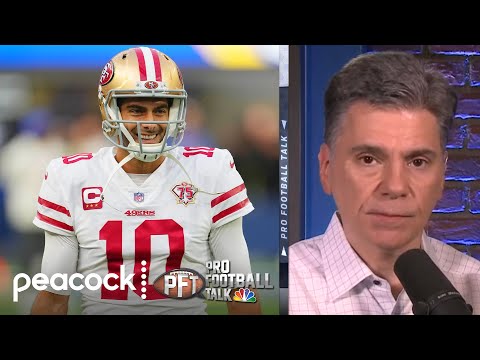 San Francisco 49ers quarterback Jimmy Garopollo has passed his physical condition and will not start the season on the injured list. NBC Sports Bay Area’s Matt Maiocco reported that Garoppolo met the team's staff and the rest of the club for routine pre-camp physicals a day ahead of the first camp practice.

Garopollo suffered a shoulder injury in the NFC Divisional Round win over the Dallas Cowboys in January. However, things have seemed to improve a lot, and his clearance will keep him off the Physically Unable to Perform (PUP) list.

Despite having a much-improved condition since the injury, Garoppolo is not guaranteed to return to his regular activities with the club. He remains training separately from the rest of his teammates. The 49ers and head coach, Kyle Shanahan confirmed this on Tuesday.

“We don’t plan on practicing him with the team,” Shanahan said. “We’ll take it day-by-day and constantly talk with him and hopefully can figure out the best for both.”

Shanahan said he would put the team before anything and needed to wait for Garoppolo to be cleared before moving forward with his future.

“He knows we have a team to think about too, and we’ll work together to figure out the best thing for that,” he said. “But in the meantime, he’s cleared to practice, but he does have a throwing program like all guys do when they get elbow or shoulder surgery, anything with your arm there’s a protocol in how you build them up, so they don’t re-aggravate that, and he’ll be doing that on the side.“

The 49ers were planning to trade Garoppolo in the offseason, but the injury derailed the plan and made him stay on the team. With Garoppolo’s unavailability on the field, the team is now embracing the future with young quarterback Trey Lance.

"I think our team's ready for Trey, going through OTAs," Shanahan added. "I'm just pumped to get to work and provide him some practices cuz I know the kid has the ability. He's made of the right stuff. He just needs the reps, and he's gotta start banking those."

When asked about Garoppolo’s possibility of being available for the team, Shanahan answered diplomatically, indicating that he did not put too much hope for the 30-year-old quarterback to show up.

“I think anything’s possible but that would surprise me right now,” Shanahan said.

The 49ers gave Garoppolo a $7.5 million guarantee for his injury in the contract. This prevents the club from doing anything with him in the first offseason. Now that Garoppolo has been cleared, the team will no longer be on the hook for that guarantee and will instead hit a$1.4 million dead cap for releasing him.

Now the team has much time to decide as their $24.2 million base salary does not come through until the first week of the regular season. However, Garoppolo might not want to wait so long, and now it is up to the 49ers to execute their plan.