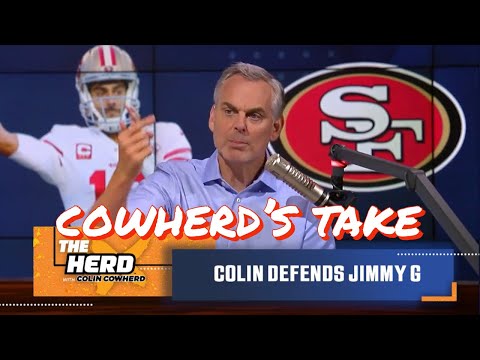 Well-known sports analyst Colin Cowherd has praised San Francisco 49ers quarterback Jimmy Garoppolo, saying he was "the most underrated player in the NFL".

After suffering an injury in the NFC Divisional Round win over the Dallas Cowboys, Garopollo needed at least 16 weeks for recovery. It means that the Illinois-born will be back in a fully-recovered condition by mid-August. By then, he is expected to be able to make a full range of throws.

The injury cost him a mandatory minicamp with the rest of the 49ers squad. The situation also damaged the club's plan to trade him. Garoppolo’s future became uncertain since.

With Garoppolo unable to throw for much of the offseason, many teams began doubting his ability. The market showed no reactions to his availability. Cowherd said he did not understand why no team jumped to acquire him.

'He is incredibly coachable, an all-star in the locker room, and was available for 95 percent of the games last year'

Cowherd was adamant that Garoppolo deserved more chances to prove his worth in the NFL. The 58-year-old presenter presented an argument why the quarterback should not lose the market's attention.

“What you do not want to be at quarterback is chaotic, incompetent, and uncoachable. He is incredibly coachable, an all-star in the locker room, and was available for 95 percent of the games last year, and there’s no market for him? This ‘he’s never available,’ is nonsense,” the analyst said.

Aside from the impressive stats, Cowherd pointed out more facts to prove that Garoppolo had not lost his touch despite entering his early thirties.

“He was in an offense that is geared towards throwing the football, he ranked 6th in the league in completion percentage, ninth in passer rating, second in yards per attempt, and first in yards per completion,” said Cowherd.

“He’s not great, he had a bad pick in the Rams game. He doesn’t always play great but he wins games. It’s a one-year deal, and he wins 75 percent of his starts.”

Niners not in a rush

The injury might not affect Garoppolo’s availability when the season begins as his condition is relatively well after the surgery. According to NFL.com, he is monitored by Dr. Neal ElAttrache, who said his injured shoulder was "progressing well".

The club is reportedly thrilled about the development of its quarterback. The main concern now is his trade value since he already missed 25 regular games in the last four seasons. Garoppolo has one year left on his contract with the 49ers.

With such a situation, the Niners will not push too hard for a trading plan. They will observe what the future can hold for the quarterback. Even with Garoppolo's non-guaranteed $24.2 million base salary, ditching him out of the club is not part of the plan.