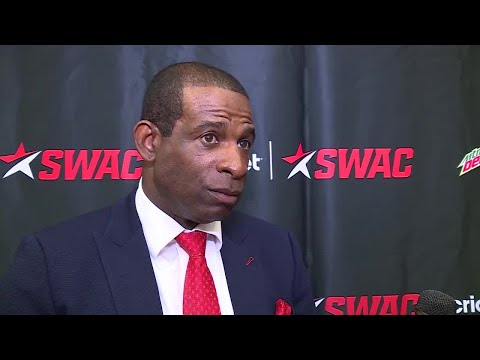 After securing the commitment of four-star athlete Travis Hunter in the 2022 recruiting class, Sanders shocked the recruiting world by switching from Florida State to Jackson State.

Sanders views his team is not ready

Despite his success with the program, Sanders doesn't consider his team is ready to face Alabama.

Sanders dismissed the notion that his team could face the defending national champion Alabama at the SWAC Media Days in Birmingham, Ala. He said that his team is not focused on making a sacrifice for a check. He also noted that the difference between a Power 5 program and an HBCU is the strength of their defensive and offensive lines.

"You gotta get me another year. I got to get beef up in the front," said Sanders.

"The difference of Power 5 and HBCUs right now is the big guys in the middle. It's not the quarterbacks, it's not the receivers, DBs and skilled positions. It's those big dogs in the middle. We've got to beef up that (the lines) to be able to compete with something like that."

There's no chance of a revenge game between Sanders and Nick Saban, the head coach of the Alabama football team. The two coaches disagreed briefly, but their relationship improved.

During the SEC Media Days, when asked about playing in-state schools such as Alabama A&M and Alabama State, Saban said he would be "very much in favor" of doing so.

The 70-year-old coach said that playing in-state schools helps boost the competition for the programs located in the same region. He also noted that it can help the players develop their skills and contribute to the success of the organizations.

"I've always been an advocate of playing in-state schools," said Saban. "Because I think it sort of helps them raise their level and their ability to compete, which obviously if you do that, you also contribute to how successful the players in those organizations can be."

Since he took over the program in 2007, the Alabama football team has not faced an in-state school. The only programs that it has met that are in-state are Samford, Birmingham-Southern, and Auburn.

According to reports, if Sanders' Jackson State team wants to play in the SEC, they will likely face either Mississippi State or Ole Miss. During the media days, Mike Leach and Lane Kiffin expressed their interest in playing the Tigers.

When asked about the possibility of facing Sanders' team, Texas Tech head coach Leach said that his program doesn't have a scheduled game. He praised the work of the Jackson State staff, which includes former head coach Tony Hughes.

Kiffin praised the work of Sanders and the success that he has brought to the program. He noted that it would be exciting to face him and his team.