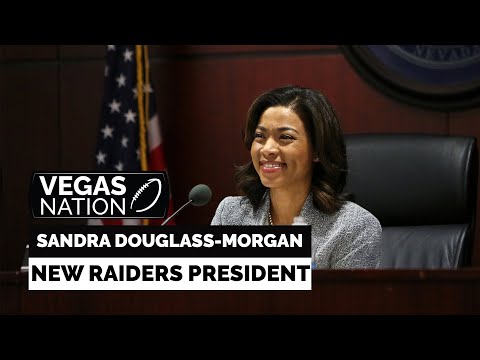 A Las Vegas native, Morgan previously served as the Nevada Gaming Control Board's chairwoman and executive director before joining the Raiders. Additionally, she has worked as a litigation attorney for an international gaming and hospitality company and as director of external affairs for AT&T Services Inc. in southern Nevada.

"I am thrilled that Sandra has agreed to join the Raiders family," franchise owner Mark Davis said in a statement. "Her experience, integrity, and passion for this community will be invaluable to our organization."

As the third woman and third Black person to become the president of an NFL team, Morgan made history as the first person of color to chair the Nevada Gaming Control Board. Her husband, Don Morgan, played for the Minnesota Vikings and Arizona Cardinals from 1999 to 2002.

Morgan's hiring marks yet another barrier-breaking move by the Raiders. Art Shell was the first Black head coach of the NFL's Super Bowl era, while former Raiders coach Tom Flores was the first Hispanic coach to win a Super Bowl title.

In 2013 Morgan became the first Black city attorney in Nevada. She served in that role for eight years in North Las Vegas.

"I definitely never want to be the last,'' Morgan said, "and I want to get to a point where there is no more firsts.''

She added, "we have so much more to do, and I'm excited to be at the helm of that growth and look forward to ushering in the new chapter for the Raiders".

Morgan said she accepted this role because she believed in the Raiders' future and potential.

In July 2021, Dan Ventrelle was appointed interim president following Marc Badain's resignation. He assumed the role of president in January 2022. Nevertheless, Ventrelle left the organization barely a year after joining. As reported by the Las Vegas Review-Journal in May, Ventrelle said he was fired for raising concerns about a "hostile work environment" within the NFL.

"It's no secret that this organization has faced some recent challenges, but I want to be clear, I am not here to sweep anything under the rug or avoid problems or concerns that need to be addressed,'' Morgan said. "It's important to me and it is my intention to make a meaningful contribution well beyond the Raiders family.''

"It's incredible,'' Crosby said. "She's honestly the best for the job, and it's going to be awesome. We're excited for the future.''

"We congratulate Sandra Douglass Morgan on her historic hiring as team president and are excited to welcome her into the Raiders family. Sandra brings impressive leadership experience to the organization and we are thrilled to work with her as we continue to build a championship-caliber culture and team,'' the statement reads.