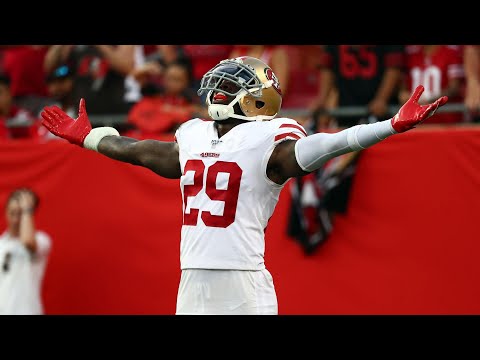 On Friday, June 17, the Philadelphia Eagles announced that it had agreed on the terms of a one-year contract with the former 49ers safety. With this, Jacquiski Tartt has a new home.

Darius Slay, Anthony Harris, Marcus Epps, James Bradberry, and Avonte Maddox will be among Tartt's teammates in the Eagles' secondary.

Slay, a three-time Pro Bowler with the Detroit Lions was named to his fourth Pro Bowl in his first year in Philadelphia in 2021. With a 40-time of 4.36 seconds, he was the fastest defensive back at the combine.

Meanwhile, before joining the Eagles, Harris spent six years with the Minnesota Vikings. During his time with the Vikings in 2018 and 2019, he was one of the top safeties in the league.

After being claimed off waivers in 2019, Epps who also made his NFL debut with the Vikings has made eight starts in the last two years. The Eagles appear to be comfortable with the former Vikings' sixth-round pick as one of their starting safeties.

Bradberry is starting his debut season with the Eagles just like Tartt. He was a Pro Bowl selection in 2020, spending the previous two seasons with the New York Giants after four years with the Carolina Panthers.

Maddox, a fourth-round pick in 2018, is in his first full season with the Eagles after signing a three-year contract deal in November. Previously, in 2021 Maddox was named by Pro Football Focus (PFF) as the Eagles player with the best improvement.

Tartt's stats with the 49ers

Tartt helps the Eagles' side of safety

It can be said that safety is the thinnest position on the Eagles roster. At the start of the season, the Eagles were attracted by some of the top free agents including Justin Reid despite being unable to land them.

Tartt's presence is considered capable of strengthening the weakest position group in the team. This is also supported by the presence of Harris and Epps who will also increase the safety of the Eagles.

Tartt is an underappreciated player in the 49ers' strong defense. However, one thing that is certain is that when Tartt takes to the field, the 49ers' defense is getting stronger.

This is backed up by Tartt's combination of intrepid and athleticism. He has a high speed to be able to catch Kyler Murray. So far, not many players are able to defend and have high speed to secure Murray.

Besides being able to cover almost the entire running back, Tartt is also a pretty strong safety player. The accuracy of his choice of position when taking the corner of the ball is quite strong, which keeps him from having to make many adjustments to the direction of the ball.