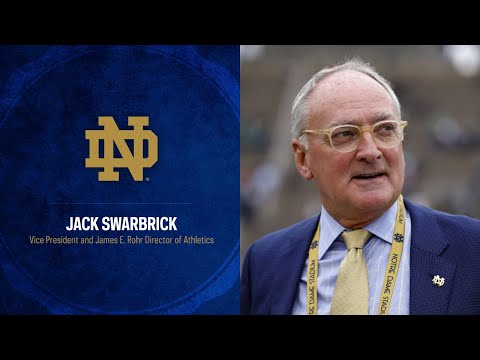 University of Notre Dame athletic director Jack Swarbrick has described Big Ten’s upcoming broadcasting contract with NBC as a “perfect” complement to the school's broadcasting deal with the network.

Swarbrick made the comment during a live chat session with the school’s alumni. According to Swarbrick, Big Ten’s television deals can enable the Notre Dame Fighting Irish to stay independent, particularly in the football division.

Swarbrick said the deal meant the television network had become “invested” in promoting college football. He said the network would become more attractive with more games being offered.

“We need NBC to have more college football to more effectively promote our games and to talk about our games and to have NBC be seen in that light,” Swarbrick said. “So that was great for us that (NBC) got a big piece of this.”

The Fighting Irish football team has a media rights deal with NBC that started in 1991 and will run through 2025. The team gets several primetime broadcasts per season on the network. They broadcast the remaining games of the season on Peacock.

“When I started this job ... all the commentary was were we relevant anymore? This year, no one is asking that question,” the director said.

“A lot of this dynamic has just reinforced the decisions made over a lot of years that have placed Notre Dame in a very good position. That’s my biggest takeaway.”

Notre Dame is a part of the Atlantic Coast Conference (ACC) for the majority of its sports divisions in the NCAA. However, the football division of the school is not part of any conference at the moment.

To maintain its independence, Notre Dame has agreed to play five football games per season against members of the ACC. The agreement dictates that Notre Dame’s football team must join the league when it gives up its independence. The contract will end after 2036.

Swarbrick explained three factors that might cause Notre Dame’s football team to join a conference, which are a media partner that broadcasts all Fighting Irish’s home games, access to playoffs in college football, and scheduling that is not hard on the college athletes.

Big Ten has not finalized its contracts with the network. Reportedly, the conference did not only approach NBC for the media rights but also Fox and CBS. ESPN reportedly pulled out from contract discussions.

In a recent interview, a Big Ten representative said, “The overall constructs of the new rights agreements have not been finalized. The conference continues to have productive meetings with both linear and direct-to-consumer media partners."

The Big Ten had also said it had plans to broadcast games on streaming services. They are currently discussing the terms with potential streaming partners.