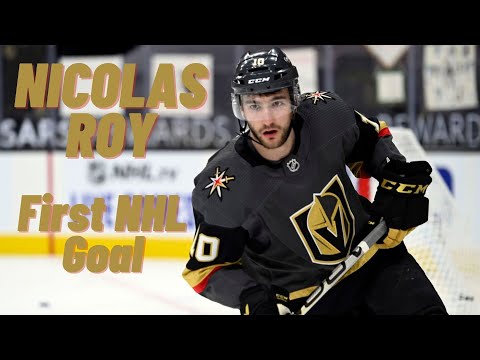 The Vegas Golden Knights have re-signed forward Nicolas Roy to a five-year $15 million contract with an average annual value of $3 million.

Roy became a restricted agent in the summer of 2022 after his previous two-year, $750,000 contract extension expired.

“I’m very excited to be in Las Vegas for another five years,” Roy said in a video posted on the Golden Knights’ TikTok account. "I can’t wait to play for you. Enjoy the end of summer, see you soon."

Roy debuted in the big league with the Carolina Hurricanes. The team drafted him 96th overall in the fourth round in 2015. He attended the team’s training camp before the 2018-2019 season only to have him reassigned to the Hurricanes’ American Hockey League (AHL) affiliate, the Charlotte Checkers. He would remain to play in the AHL until he and a conditional 2021 fifth-round pick were traded to the Golden Knights on June 26, 2019, for center Erik Haula.

The Canadian occasionally played for Vegas' AHL affiliate team, the Chicago Wolves, in the 2019-2020 season. On October 27 that season, Roy made his first NHL career goal after defeating the Anaheim Ducks 5-2. Roy netted a game-winning shot for the team. The team retained him for two more seasons the following year.

The Golden Knights are getting closer to reaching its cap limit, and defenseman Nicolas Hague reportedly has yet to have his contract fixed. On top of this, the team would still suffer minus numbers even with Canadian defenseman Shea Weber placed on the injured reserve for the long-term, as per CapFriendly projections.

The team previously made a few major roster decisions to free up cap space, including the release of left winger Max Pacioretty, right winger Evgenii Dadonov, and defenseman Dylan Coghlan. The team then signed Finnish forward Sakari Manninen to a one-year contract on July 14.

"We want to put teams on their heels. We want to score goals but not at the expense of firewagon hockey," Cassidy said of the team's lineup.

"So it's check well, check as a group, be connected to get pucks back so that we can get going the other way and use our skill. There's a lot of skill up and down our lineup, so we want to make sure we take advantage of that, and players know that."