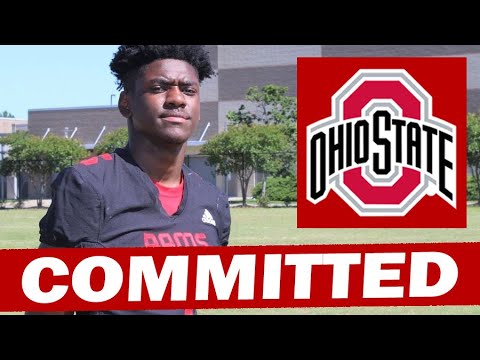 Acquiring Rogers means that the Buckeyes are competing with the Notre Dame Fighting Irish in terms of next year’s best recruiting class. Rogers is the 13th man in Ohio State’s recruitment cycle and the 12th four-star to join the team.

Prior to the announcement, Rogers already received an offer to play in the team in January this year. According to multiple reports, the four-star prospect made the decision without even visiting due to flight issues.

Rogers is a small yet crucial part of Ohio State’s recruiting grand scheme. Before signing him on Wednesday, the Buckeyes landed two other double five-star WRs, namely Carnell Tate and Brandon Inniss.

Rogers, a former Rolesville High School star outside receiver, captivated recruiting analysts prior to signing with Ohio State. The 6-foot-2, 180-pound player has a decent run speed considering his size and frame. He ran 40-yard for approximately just 4.5 seconds.

The Rolesville-born will likely be used as a support to the Buckeyes’ quarterback lineup since he is known for his exceptional route selection. Additionally, Rogers can also secure off-target throws and are not vulnerable to direct contact.

“Gets out of breaks and accelerates to gain separation. Adjusts well to off-target throws and shows excellent ball skills. He's sure-handed and willing to make plays in traffic. Exhibits body control and makes acrobatic catches look easy. Knows how to use size to shield defensive back. High-points ball well and excels on 50-50 balls.”

Aside from being a great help to QBs, catches, and rushing, Rogers can also be used as a formidable rushing piece to get through other teams’ defensive lineup.

“He shows ability to pierce defense and make big play after catch. Demonstrates some elusiveness after the catch but is at best when securing catch and getting up field. Consistently gets behind defense despite facing very little press coverage. Knows how to sit in holes against zone,” Dohn wrote.

“Willing blocker. Has strength throughout frame but will need to continue to develop strength. Fine-tuning route running and being a bit sharper into breaks will help. High level receiver at Top 10 college program. Early round NFL draft potential.”

After becoming the fourth player from North Carolina to commit to Ohio State, Rogers is projected to be the program’s centerpiece.