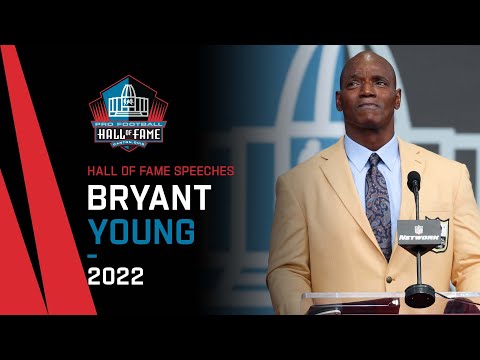 Former San Francisco 49ers defensive tackle Bryant Young, stole the show during the enshrinement of the Pro Football Hall of Fame as he gave tribute to his late son Colby who died of cancer. Colby died in 2016 at the age of 15 after being diagnosed two years earlier.

The fact that Young was inducted in the year 2022, gives him a deep meaning to the ceremony. In a 10-minute speech at Tom Benson Hall of Fame Stadium, he said that Colby’s favorite number was 22.

Young’s voice broke when he gave the details about his son. Diagnosed at the age of 13 in 2014, Young said that Colby took the news bravely after being told that cancer had spread and treatments were no longer working in 2016.

"Colby sensed where things were headed," Young said. "He didn't fear death as much as the process of dying. Would it be painful? Would he be remembered? Colby, you live on in our hearts. We will always speak your name."

Young played the Pro Bowl game four times during his career. He also made the first-team All-Pro twice and was a member of the NFL’s All-Decade team of the 1990s.

After leading the 49ers with 11 sacks to go along with 20 quarterback pressures in his return from a broken leg, Young was awarded the 1999 NFL Comeback Player of the Year.

Alongside Young, there were seven other notable names such as Tony Boselli, Cliff Branch, LeRoy Butler, Art McNally, Sam Mills, Richard Seymour, and Dick Vermeil who also was inducted this year.

Boselli was also a Pro Bowler, taking part in the game five times and a three-time All-Pro. He was a member of the NFL’s All-Decade Team of the 1990s before his career ended earlier due to a shoulder injury.

He was the first Jacksonville Jaguars player in history to be elected to the Hall of Fame, as well as the first pick in franchise history back in 1995.

"Well, this is amazing,” Boselli said. “As the first Jacksonville Jaguar to be welcomed as a member of the Pro Football Hall of Fame is a profound honor."

The other “first timer” who was included on the list was McNally, regarded as the "Father of the Instant Replay" after introducing the system for the NFL in 1985. The league's Manhattan command center is named after him.

"This is the greatest thing I need for an official: Do the job [and] hopefully nobody's going to even know you were alive," McNally said via video. "Makes the calls the proper way the way it should be: With a heavy dose of common sense."

He was named the NFL's Coach of the Year twice by The Sporting News and once by The Associated Press.

In his speech, Vermeil gave tribute to his long list of people who have worked around him through the years. He also mentioned some fellow former coaches who attended the ceremony and gave his thoughts about them having the same recognition as he does.

"In closing, let me say I will forever be appreciative and grateful for this honor,” he said.