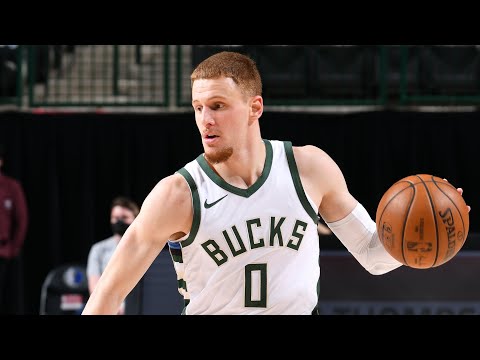 Guard Donte DiVincenzo received the chance to enter the championship club after signing a free-agent contract with the Golden State Warriors on Friday, almost three weeks after the win over the Boston Celtics in Game 6 of the NBA Finals.

Reportedly, the Warriors signed DiVincenzo to a two-year deal worth $9.3 million, with the last year being a player option. Having DiVincenzo’s commitment could mean that the Warriors were gearing up and fixing their lineup after the parting of Gary Payton II to the Portland Trail Blazers and Otto Porter Jr to the Toronto Raptors.

DiVincenzo began his professional career in 2018 with the Milwaukee Bucks. The franchise picked him the 17th overall pick in the 2018 NBA Draft. Previously he spent a three-year stint with the Villanova Wildcats.

The Newark native became the second out of four Villanova players signed that year. Despite moving to Milwaukee, the 25-year-old spent most of his rookie season on the sideline after sustaining a foot injury. Despite this, he recorded a career-high of 17 points, helping the Bucks defeat the Minnesota Timberwolves in November during his second season with the team.

In 2019, he made history after becoming the third-highest paid defensive player in the NBA, losing the top spot to the Milwaukee Bucks’ Greek Freak, Giannis Antetokounmpo.

After playing for two years in Milwaukee, DiVincenzo was involved in a four teams trade that also witnessed the return of Congolese-Spanish professional Serge Ibaka to the NBA. Ibaka was signed by the Bucks, while DiVincenzo by the Sacramento Kings.

In Sacramento, he played 25 games, averaging 10.3 points per game, 4.4 rebounds, and 3.6 assists. His recent stats demonstrated a slight slump compared to his playing career in Milwaukee during the 2020-2021 season, posting his career-high 66 games in addition to 10.4 points per game. Moreover, he recorded 5.8 rebounds and 3.1 assists.

Bucks teammate Antetokounmpo sang high praise of DiVincenzo, calling him the “heart of the team” following March 2021’s matchup against the Philadelphia 76ers.

DiVincenzo would likely be a valuable addition to Golden State’s lineup, considering Payton and Porter are no longer playing for the team. The absence of the duo means that the franchise has lost two centerpieces for its defensive and shooter departments.

Taking DiVincenzo away from free agency means that Golden State is trying to hit two birds with one stone. In other words, DiVincenzo would likely be a multi-positional player for the Warriors. Moreover, there are two ways head coach Steve Kerr would use his strategy in responding to DiVincenzo’s contract reports.

First, the former Bucks can be used as a defensive substitute to Payton, and second, DiVincenzo may be employed to help guard Stephen Curry and forward Klay Thompson in hitting more points on the front line.