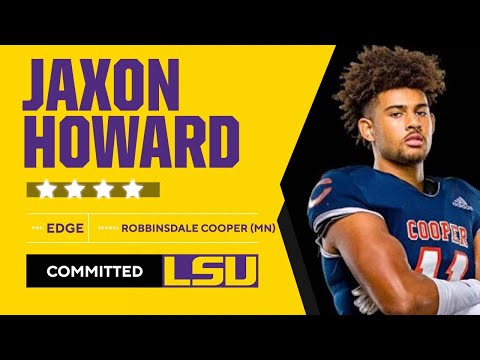 Louisiana State University lands Jaxon Howard, son of former NFL defensive lineman Willie Howard. The edge defender was the top-rated football prospect in the state of Minnesota who received 60 scholarship offers during his recruitment. However, the 6-4 plater chose LSU over Miami, Michigan, and Minnesota.

According to CBS Sports HQ, Howard had made his decision and will play his college football at LSU under coach Brian Kelly. He will travel 1,000-plus miles from Louisiana to meet Matt House, LSU’s defensive coordinator. The commitment happened after Brian Kelly’s staff picked him up in Big Ten territory, including Minnesota.

As per 247Sports Composite, the defender is listed at 6-4 and 245 pounds physically, was the No. 11 edge defender, and No. 96 prospect overall nationally in the class of 2023. Howard is one of the top tight ends for the college, but the product of Robbinsdale Cooper High will take his ability to play defense at LSU.

“Just talking ball really, I think the biggest thing is probably like it felt like being in a classroom and actually learning,” he said.

After the meeting with Kelly, he said that he was told to work for his place and there is no guaranteed position.

“Taking all the knowledge I can and implementing it into my game and then going from that meeting to a little meeting with the coach (LSU head coach Brian Kelly)," he said. "He came in really realizing hey, ‘you can come in here, be great, but you have to work for it. A lot of other coaches will tell you that you can come here, and you’ll start on the spot’. There’s no guarantees, and you know you have to work for it.”

Howard becomes one of the highest as 50th ranked highest-rated players by 247Sports to land a commitment to play with LSU. He was the seventh player and first defensive line to commit to Tigers, after wide receiver Kyle Parker on June 23. Howard said that not only was the recruiting process by himself but there are major factors, such as first-year defensive line coach Jamar Cain's presence.

“I think probably one of the biggest things, probably my relationships with the coaches,” Howard said on his decision to opt for LSU.

“Over the years I’ve had an amazing relationship with Coach Cain, defensive line coach, and I knew getting back into there, I wanted to make sure it’s not going to be just him that I would be with the whole time," he explained.

Howard also said that the support staff and the rest of the coaches, including the head coach, have encouraged him to play better. He also said it was best experienced when he met Kelly and thinks LSU will be a perfect place to study and play football.

“I’m ready to go. I think just the biggest thing is probably the support staff as well," he said. "I know my parents will be sending me to college to become a better man and I think LSU is a perfect place.”

When in Robbinsdale Cooper, Howard played both tight end and defensive end. However, after the addition of himself to LSU, he will play some more defensive roles and rusher according to coach Kelly.