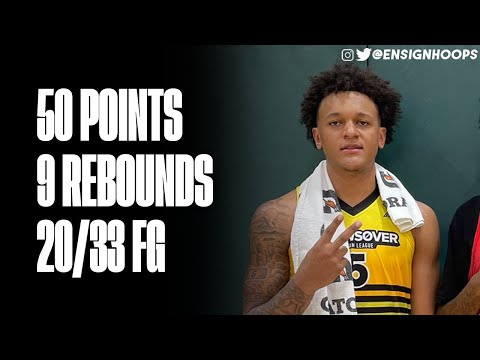 Paolo Banchero, a rookie from the Orlando Magic, showed off his skills during the Crawsover Pro-Am in Seattle. He had a great game, dropping 50 points.

Banchero partnered up with the Oklahoma City Thunder's Chet Holmgren in the game. They helped the Sonics to a victory over Ball is Life.

Banchero was averaging 20 points, six assists, and five rebounds. He ended his stay with a bang, producing 23 points on July 9. He also had four assists, two blocks, and six rebounds.

During the exhibition game, Banchero showed off his skills on the court. He could get to the basket easily and threw down several highlight-reel dunks.

NBA legend Jamal Crawford hosted the event. For the second year in a row, Banchero participated in the game. He and Crawford have a long-standing friendship.

Like Banchero, Holmgren mixed in some mid-range shots and emphatic dunks. He also showed off his skills on the defensive end, where he frequently swatted shots. Some of the fans at the event talked about his Dirk-like fade away.

Both Holmgren and Banchero were named the game's two stars. Also, Minnesota's Jaden McDaniels had a great game, finishing with 52 points and 11 rebounds. The three NBA players entertained the fans with their performances.

Banchero was considered as the best rookie in the league during the summer season. On his podcast, Draymond Green discussed the factors that caught his attention about Banchero. He also talked about his potential to become an NBA star.

Green praised Banchero for his hard work on the court and for not scoring. He noted that players in the summer league tend to score a lot.

"Paolo Banchero, I think, is one of them ones and the reason I think Paolo is one of them guys is because of the things that he did on the basketball court that were not scoring," Green said. "You get out here in summer league, guys score the basketball. It is going to happen."

He did all of the things with the basketball and made the plays, but the plays that he made that did not involve him having the basketball is why I think Paolo is going to be one of them guys. Him getting on teammates coming in as a rookie. The winning plays that he was making down the stretch," he explained.

Banchero showed off his skills during the two games he played in the summer league and he's expected to have a great rookie season. He showed what he can do when he takes the court next season.

The 6-foot-10 forward came into the summer league to show everyone that he was the best player in the draft. He'll have the time to prepare for the upcoming season as he aims to lead the Magic.