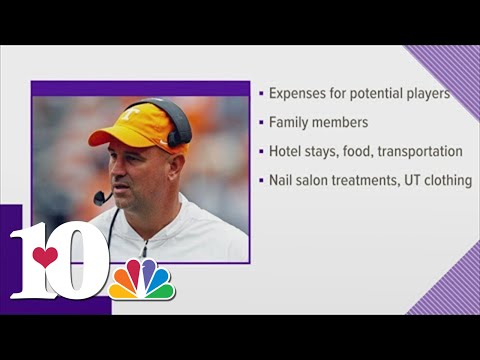 The NCAA has charged the Tennessee football program with multiple violations, which include providing improper benefits to its recruits. According to the allegations, the program's former coach, Jeremy Pruitt, and his staff gave $60,000 to multiple prospects and their families.

Among the allegations is that the coach and his staff provided $9,000 in cash and gifts to the mothers of two of the program's prospects. His wife, Casey, also made multiple payments totaling over $12,500 to help the mother of a recruit pay for her car.

After an internal investigation conducted by the university revealed the allegations against the coach, the NCAA decided not to charge Tennessee with a lack of institutional control. This is seen as a positive sign for the program as it could avoid the most severe penalties from the organization. The NCAA noted that the Volunteers' cooperation with investigators and their integrity in handling the situation helped minimize the number of violations.

According to ESPN, the Volunteers had already self-imposed various recruiting restrictions and scholarship reductions last year. They also decided not to impose a bowl ban on the program. The school opted not to punish the individuals involved in the scandal as it did not want to penalize the current staff members and coaches.

In response to the allegations, the university took immediate action to address the issue by hiring an outside law firm to conduct an investigation and immediately fired the football staff members and coaches. It also shared its findings with the NCAA's enforcement staff. Donde Plowman, the university's chancellor, said in a statement that the school followed the NCAA's "core values."

Moreover, the university also hired Michael Glazier, a former investigator for the NCAA, to help with the internal investigation. It additionally paid a law firm known as Bond, Schoeneck & King $1 million to conduct the interviews. Although the school fired Pruitt for cause, it did not plan on paying his $12.6 million contract.

After the NCAA unveiled the allegations, the former Tennessee coach released a statement to ESPN. Pruitt said he was still reading the report and would not comment further. However, he noted that he was looking forward to addressing the issue.

The NCAA also charged the school with failing to monitor its football program's recruitment activities. It also said that the Volunteers failed to monitor their coaches' visits with prospective recruits.

According to the NCAA, as many as 12 athletes from the program were allowed to participate in over 60 games. However, they were not eligible because they received impermissible benefits.

In addition, the NCAA said that the coach and his staff failed to promote an environment of compliance. The organization accused the former head coach of breaking the rules by providing improper benefits to the families of prospective recruits.

"Pruitt did not demonstrate that he monitored his staff or promoted an atmosphere of compliance within the football program when at least a dozen of his staff members were involved in more than 200 individual violations of NCAA legislation over a two-year time period as detailed in Allegation Nos. 1 through 9," the allegations said.

Furthermore, the number of violations and the nature of the issues raised by the investigation indicated that the coach failed to establish clear expectations for his staff members and ensure that they followed the rules. Pruitt also did not establish a program that would allow the compliance staff to immediately report potential issues.