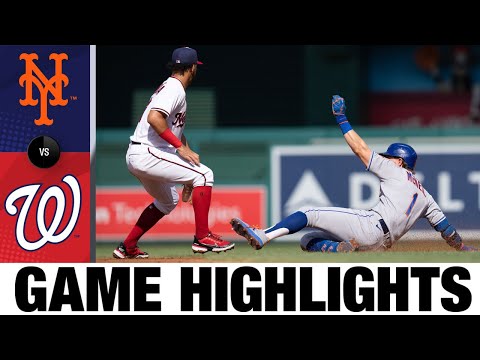 Washington Nationals fans took to Twitter to express disappointment over their 9-5 loss to the New York Mets on Wednesday night.

It was the final game of a three-game series. The Mets won the series 2-1, strengthening their position as the first in the NL East.

A Nationals fan tweeted, “@Nationals I’m not as mad as I was yesterday but I’m still really not happy.”

“How did that bullpen addition work out? lol. What a disaster this Nationals series was,” another fan wrote.

According to fans, the team must prepare for more losses like this after the Nationals traded away star player Juan Soto to the San Diego Padres. The team also traded away Josh Bell to the same team.

Fans also said that the Soto trade would be something that they talk about for a long time.

“@Nationals The only way I forgive you guys if A we get Soto back or B these prospects ball out,” a fan wrote.

In the second game against the Mets, the Nationals defeated the away team 5-1. Fans called it "surprising" because it was the first game the Nationals had without Soto. During that game, Nationals had Luis García, Yadiel Hernandez, and Joey Meneses contributing to the final score.

That result offered hope to the team and fans which was crushed in the recent game. Despite the latest loss, most fans said they would still support the Nationals.

After meeting the Mets, the Nationals have a packed schedule this August. They will face the Philadelphia Phillies in a four-game series starting on August 4. The Nationals will also play Soto’s new team in two series later this month.

In 2019, the Nationals claimed a World Series win after defeating the Houston Astros in the final. Soto was one of the players who helped the team earn the title. The Nationals’ current roster is mostly devoid of star players participating in the World Series three years ago.

Analysts have said that the Nationals did not make a good call in the recent trade. In return for Soto and Bell, the Nationals received Luke Voit, MacKenzie Gore, C.J. Abrams, Jarlin Susana, and James Wood.

Abrams, for example, had a good start in his first 139 batting chances, which recorded .232/.285/.320. However, the young player sustained a leg injury last summer that prevented him from completing the season. Analysts at CBS Sports also said that his swing decisions were not ideal for the major league.

Gore had been let out of the bullpen several times by the Padres. The young player had a mid-90s fastball and signature curveball as his most famous weapons. Just like Abrams, though, Gore recently sustained an injury. Analysts also highlighted his wildness, which might make it difficult to place him in the rotation.

Compared to the players that the Nationals received from the trades, analysts argued that Soto was more consistent in his performance.

It is expected that the Nationals will see a change in management sometime soon. The franchise’s current ownership is in the hands of Ted and Anette Lerner, who bought it for $450 million in 2006.