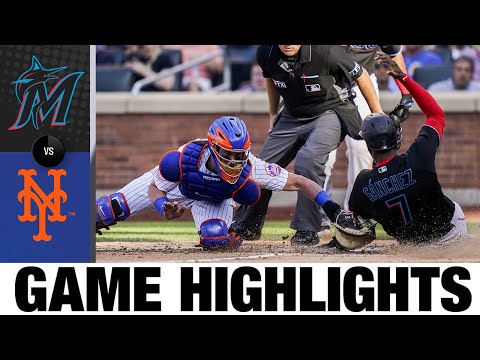 The New York Mets continued their MLB campaign by playing the third game out of a four-game set against the Miami Marlins. In that match at Citi Field, Queens, the Mets snatched the win with a tight score of 5-4 against Don Mattingly’s Marlins.

Mets manager Buck Showalter started Carlos Carrasco on the mound, while Mattingly placed 27-year-old Braxton Garrett to get the early strikeouts. For the hitting lineup, Showalter played Tomas Nido who scored the winning run in the tenth after a ball thrown by Marlins reliever Tanner Scott.

The Mets (53-32) started the game top of the NL East after losing 2-5 in the previous second game. Meanwhile, the Marlins (40-43) are fourth in the same conference as the Mets after coming back from a 10-0 first-game loss.

At the top one, Marlins’ Jesus Sanchez swung strikeouts and couldn’t manage to score a run. Thereafter, Jesus Aguilar was out at the second base and Avisail Garcia was grounded at first base because of the double play from Luis Guillorme to Francisco Lindor.

The game was tied after the third inning, with the Mets batting at fourth. Mets first baseman Pete Alonso hit the flying ball from Garret and ran for his 23rd homer this season. He hit a two-out and made the Mets lead the game 0-1 at the bottom four.

Then, the Marlins made the game 2-1 with Aguilar and Garcia scoring after Brian Anderson had an RBI double in the top six. The run from Aguilar and Garcia happened after Mets reliever Seth Lugo threw the ball hit by Anderson. Meanwhile, in the bottom six, Lindor hit a two-run homer with Alonso running back home from second base, and the Mets changed the lead 2-3.

Showalter said that he played Alonso and Lindor after right fielder Starling Marte and catcher James McCann were injured in the middle of the inning at bottom three. Both Marte and McCann will be carrying out their MRIs test after.

In seventh, Miami DH Garrett Cooper and Mattingly were ejected for speaking with home plate umpire Mark Ripperger just before Aguilar tied the score 3-3 for the team. Agular homered in the eighth by hitting the ball to left field.

After the 3-3 tie in the ninth, the winner of the game was decided in the tenth inning. Marlins Billy Hamilton scored after Lindor throwing error to change the score to 4-3. But, not long after that, Nido ran to second base after hitting the ball from Marlins reliever Scott and made Mark Canha run back to base from second. Then, the deciding run occurred after Brandon Nimmo hit the ball, Nido scored for the 5-4.

Before the game, the Mets held a pregame ceremony to retire first baseman Keith Hernandez's No. 17, with 43,336 fans in attendance at Citi Field. During the ceremony, Alonso stated that Hernandez is valuable to the franchise. As with the victory over the Marlins, Hernandez was on the mound in the tenth inning against the Boston Red Sox. It also happened in Game 6 of the World Series in 1986.

“He means so much to this organization,” Alonso said.

Meanwhile, Showalter stated that the Mets are having their luck winning games in extra innings on Hernandez’s days. Additionally, he said that the Mets can beat the Marlins if they find a way to win.

“You really want to figure out a way to try to win a game on Keith’s day,” Showalter said. “So the baseball gods shined on us.”