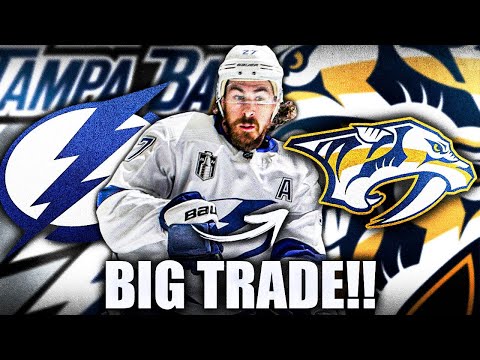 The 2021-2022 NHL Stanley Cup finalists Tampa Bay Lightning sent defenseman Ryan McDonagh to the Nashville Predators to get Philippe Myers and Grant Mismash. The trade was announced on Sunday by Elliotte Friedman, saying the Lightning they were looking for a McDonagh replacement from the Predators.

The McDonagh trade was followed by Tampa Bay re-signing forward Nick Paul to a seven-year extension on July 1. It has been reported by a source that the Lightning wanted to clear an extra cap to sign Ondrej Palat to retain him from being a free agent. Furthermore, by this trade, McDonagh has ended his four-year journey with the Lightning after being traded from New York Rangers in 2018.

With the addition of McDonagh, the Predators will have a two-time Stanley Cup winner and a two-time NHL All-Star. This year, the 33-year-old entered his third time playing in the Stanley Cup Final as a member of the Lightning. He contributed to the win in the first two consecutive finals, but lost the last one against the Colorado Avalanche.

Despite the final loss last season, he tallied four goals, 26 assists, and 137 blocked shots in 71 regular-season games when he played. In the NHL playoffs, he played for 23 games, scored one goal, assisted four, and recorded 19 blocked shots to lead the Lightning to the Stanley Cup Final.

The 6-foot-1 defenseman has played in the NHL for a total of 12 seasons and started his journey back in 2011 as a New York Rangers player. He spent eight seasons for the Rangers before getting traded to play for the Lightning. In New York, he was selected as their captain in 2014. He also led the way for the Rangers to get their 7th division championships in the NHL. McDonagh became the fourth-youngest captain in franchise history and had a total of 516 appearances.

Predators’ side on getting McDonagh

Nashville Predators General Manager David Poile has confirmed the trade of McDonagh from Tampa Bay in exchange for their two players, Mismash and Myers. Poile said that the 33-year-old defenseman would be a player who could make the team's defense better.

He said that he was certain in McDonagh's ability to be impactful on the team's play. Also, he said that the Predators management is thrilled by McDonagh's addition to the team.

“Ryan McDonagh is the final word workforce participant who will carry expertise and management to our lineup,” he said.

“A former captain of the New York Rangers, a two-time Stanley Cup winner and four-time Stanley Cup finalist, we could not be extra thrilled that he waived his no motion clause to come back to Nashville. With the power to play in any scenario, he instantly strengthens our defensive corps.”