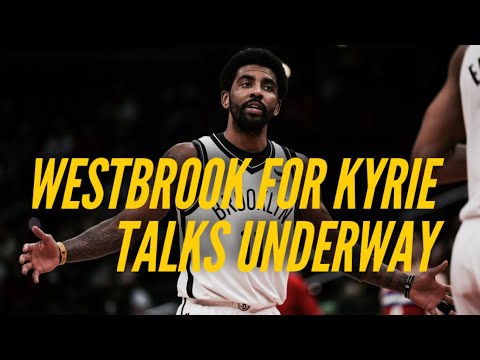 The Los Angeles Lakers are reportedly interested in Brooklyn Nets’ star Kyrie Irving. As per multiple sources, the Lakers are on the move to reunite Irving with his former Cavs teammate, LeBron James, to play at Staples Center. For the trade, it is reported that Lakers’ president Jeanie Buss is preparing a "package" that includes Russell Westbrook to get Irving.

However, the 30-year-old point guard has not played a full 82 games last season for the Nets. Irving only played for 29 games because he refused to follow the COVID-19 protocol by refusing the vaccine. The Australian playmaker has not played for 70 games in a season since he played for Cleveland Cavaliers in the 2017 NBA season.

According to Yahoo's Chris Haynes, both Nets and Lakers are actively engaging in trade discussions. Haynes said that the franchises are pointing out how Westbrook-Irving will happen, including the trade package for each team.

He said that the Nets are in "a bad situation" where the team's all-star forward Kevin Durant requested a trade to the franchise’s board. Moreover, Haynes said that there are some possibilities around the Nets to take Westbrook's expiring contract with the Lakers. The Nets will be eager to acquire some draft picks from the trade, Haynes added.

On the Lakers’ side, Haynes said that draft compensation is currently one consideration for the trade completion. The Lakers are out of future draft picks after the trade to the Pelicans for Anthony Davis deal. He predicted that the franchise would be unwilling to give their remaining future first-round pick to move Westbrook.

Furthermore, Haynes said that the Lakers also don't want to include another player to get Irving. On the other hand, the Nets intend to move Joe Harris, who has a two-year remaining contract worth $38.6 million, but it may be locked in the deal if the Lakers can get Seth Curry instead, according to sources.

The potential trade of the Lakers sending Westbrook for Irving has made the reaction popping up from both teams' fans. According to sources, the potential trade to Irving wearing purple and gold has been popular on the internet. After Haynes' tweet about the trade, some people started giving responses.

"Ben Simmons and Westbrook on one team," a fan tweeted.

NBCS Chicago’s radio host Tony Gill also shared his thoughts about the possibility of the trade between Lakers and Nets. He said he would give Kyrie if he was on the Nets’ board.

"So the Nets want the Lakers to take Joe Harris if they want Kyrie and the Lakers instead want Seth Curry along with the salary dump of Westbrook," he said.

"If I’m the Nets I’m not budging on that. I’m giving you the better, younger, cheaper player in Kyrie. You take what I give you," Gill continued.

Meanwhile, The Athletic’s John Hollinger said that the Nets still have to move Kyrie out, regardless of whether the Durant transfer will happen after.

"... Regardless of how the KD piece works out the Nets still have to dump Kyrie, and this was always the most logical dumping ground," he said.