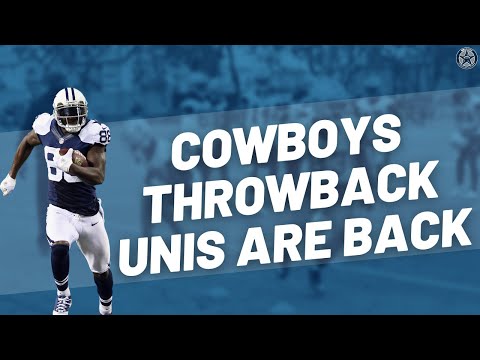 This season, the Dallas Cowboys opted to freshen up their uniforms with a dash of color and nostalgia. The Cowboys are taking full advantage of the NFL's recent relaxation of its regulations on the types of helmets and jerseys that can be worn.

Around 10 years ago, the NFL decided to impose a rule stating that only one type of helmet shell may be worn. The elimination of that regulation has resulted in the return of several throwback outfits, notably the Falcons' red helmet and Patriots AFL kits, in 2022.

The Cowboys are known for keeping their uniforms basic. Still, their original design was one of their more lavish due to the two-tone look on the shoulder pads and flashy white helmet. This old-school aesthetic is making a comeback after being dormant for a few years.

The Cowboys have confirmed that they will wear their throwback uniforms against the New York Giants on Thanksgiving Day. Chief brand officer Charlotte Jones said that the team is "beyond pleased" to get these jerseys back into the rotation, emphasizing the history.

The throwback uniforms were worn during Tom Landry's formative years back in the 1960s, and the squad had fun watching Eddie LeBaron toss the ball to Don Perkins and Frank Clarke on NFL Films, despite the fact that they did not have much success during that era.

Dallas' blue, white, and silver color combination is hard to mess up, and the throwbacks always stood out because of their simplicity. They will finally have the opportunity to rekindle memories of the early Cowboys teams by wearing the throwback uniforms.

Meanwhile, the Giants, Dallas' rival, have confirmed that they will wear their vintage '80s throwback outfit for a few games this season. They will not, however, wear the old uniforms for the Dallas game.

Besides the throwback uniform coming back, there's news regarding the cowboys' future roster shift. A couple of crucial players on both sides of the ball were cut after the Cowboys' poor performance in the Wild Card round. Amari Cooper, who was traded to the Browns, was one of the key players who left the team.

Because of that transaction, speculation has centered on who will succeed Cooper as the Cowboys' primary wide receiver. The widespread assumption appears to be that CeeDee Lamb will take over as the team's WR1.

In response to a question regarding the shift, the Browns' wide receiver had things to say.

"CeeDee's been ready. Again, it's just about opportunity. I think if Kellen (Moore) decides to feature him, he's definitely ready to step up. CeeDee is a playmaker."

Lamb and Cooper teamed up last season to form one of the league's most deadly wide receiving combinations. Regarding the Cowboys' success, Cooper and Lamb's talents were a major factor. In any other organization, both guys would be regarded as WR1s.

The Cowboys' predicament was made worse by an offseason trade involving one of their toughest rivals in the division as the Philadelphia Eagles bolstered their attack with the acquisition of great receiver AJ Brown.