What LeBron James' extension with Lakers means for both parties 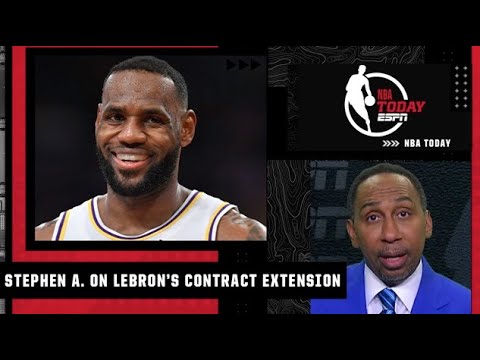 On Wednesday LeBron James' agent announced that James signed a two-year, $97,1 million contract extension with the Los Angeles Lakers. NBA insider Adrian Wojnarowski was the first to report the deal.

The new contract made James the highest-paid player in NBA history. He will receive $46,7 million this season and this contract also provides him with a player option that allows him to become an unrestricted free agent in December 2024 should he wish it.

"The Lakers could have north of $20 million in salary-cap space in the 2023 offseason and would have the ability to sign a third max contract player in the 2024 offseason," Wojnarowski said.

"The player options increase salary-cap space if players decline them, and yet remain on new deals."

Previously, James' contract situation had started a lot of off-season speculations, but his decision to stay with the Lakers has officially ended the ongoing rumors regarding James being a free agent.

Nevertheless, After playing with the Lakers in the last four seasons of his 19-year career, it was unlikely for him to depart.

The player option for the 2024-25 season will give James the option to leave just in time to play with his oldest son Bronny who will become eligible for the draft in 2024. Earlier, James has shown his desire to play on the same team as Bronny when his son finally reaches the NBA.

The contract also gives the Lakers more certainty regarding James' future with them. Furthermore, this extension may also affect the Lakers' approach with the final season of Russell Westbrook's contract.

James and the Lakers have discussed the parameters of the contract in a meeting on Aug. 4. Agent Rich Paul of Klutch Sports Group said to ESPN that the meeting was "productive" but did not directly result in an extension.

Kevin Pelton of ESPN wrote, "Given LeBron was always going to merit the maximum possible starting salary that will be determined by the salary cap but cannot come in lower than $46,7 million it seems likely those conversations were more about the direction the Lakers will take as a franchise."

Pelton wrote that with James continuing to work with the Lakers, their budget has now shrunk considerably. He said that the Lakers still had some options if they could still keep Westbrook past the limit of his current contract.

Based on the current 2023–24 cap forecast of $133 million, the Lakers would have around $34 million in space if Horton–Tucker declined his player option and if they renounced all of their current free agents.

Pelton speculated that this would enable the Lakers to reset their team members even if it wouldn't be enough to make a max offer to a player with more than six years of experience.

Moreover, Pelton argued that James staying with the Lakers didn't make a lot of sense. James had switched teams many times in the past because the teams that he had worked with have a tendency to drain their resources to win championships.

"LeBron would have been better off ditching L.A. after this season and finding a new team," Pelton wrote. "As James' career winds down, the appeal of living in Los Angeles appears to have become the key factor in his decision-making."