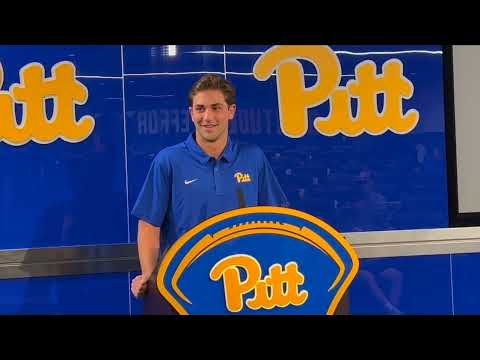 Slovis beat out the senior Nick Patti for the position in their next Atlantic Coast Conference campaign. Patti, who has spent four seasons as a backup behind Pickett, said he respected the decision.

New users within eligible states can claim a special promo from DraftKings Sportsbook. During the promo period (August 15 - September 19), if you place your first bet on any College Football games you can instantly receive $200 in free bets. The free bet credits must be used within seven days or it will be void.

Pitt Head coach Pat Narduzzi praised both players but insisted that the program would go with Slovis.

"We've got confidence in both of them," coach Narduzzi said. "Unfortunately, the quarterback position is one guy. It becomes a one-man show.”

Slovis' accuracy is one of the reasons he secured the position. “He’s a really, really good passer,” Narduzzi said. "We think he can lead us."

Pittsburgh's new offensive coordinator Frank Cignetti and Narduzzi did not rush the decision to name the quarterback. They assessed his performance during practice and monitored each detail before saying “yes” to Slovis.

“(Slovis) is the guy,’” Narduzzi said. “And we’ve got a lot of trust and faith that he’s going to be the guy.”

Slovis' first gig as a starter will be the match against the West Virginia Mountaineers on September 1 at Acrisure Stadium. The Panthers will be facing long-time rival Mountaineers for the first time since 2011.

Slovis was adamant he could be the next Pickett for the team. He said he would start following the standard Pickett had set. After that, he said he would take it to the next level.

“You’ve got to remind yourself, you know, just do what coach wants you to do, be coachable, run the offense, execute,” Slovis said. “And again, things will kind of take care of itself.”

Pittsburgh has many things to live up to this season after winning the ACC and making the Peach Bowl. Slovis has been named to the preseason watch list for the Johnny Unitas Golden Arm Award, and it is hoped his transfer can help the Panthers in their 2022 campaign.

Before leaving the Trojans last winter, the Arizona native had thrown 58 touchdowns against 24 interceptions for three seasons. Slovis had spectacular starts as a freshman, managing to throw 30 touchdowns. He entered 2021 as a Heisman Trophy candidate. Unfortunately, his season was cut short due to injuries, which resulted in inconsistent play for the team.

The situation led to the firing of head coach Clay Helton in September. Slovis ended his Trojans tenure in early November following a lower-leg injury. A month later, he announced his commitment to the Panthers after USC hired former Oklahoma head coach Lincoln Riley to replace Helton.