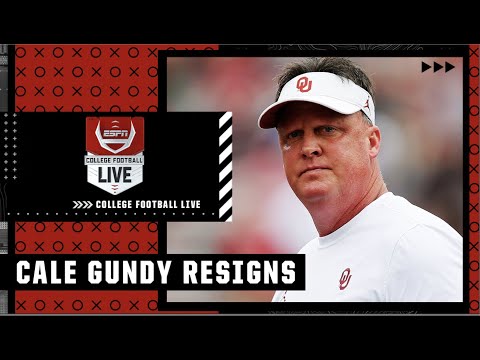 Brent Venables released a statement on Monday regarding the incident that led to the resignation of assistant coach Cale Gundy.

Gundy resigned from his position as the wide receivers coach at Oklahoma on Sunday night. He had been with the program since 1999 and played quarterback for the Sooners from 1990 to 1993. His departure from the program was unexpected.

In his statement, Gundy said that he accidentally read an inappropriate word while talking to a player on his iPad during a team meeting last week. His actions caught many people off-guard, as the punishment of resignation didn't seem like a fit for the crime.

Venables, the first-year head coach of the program, released a statement on Monday regarding the incident.

Gundy did not provide adequate information in his statement. In his view, Venables stated that he was dealing with a difficult situation, and it didn't go over well with the players he was charged with protecting. He also addressed some of the issues that affected the program.

"As painful as it has been dealing with Coach Gundy resigning from the program, it doesn't touch the experience of pain felt by a room full of young men I am charged to protect, lead and love. There are a few things I would like to address," Venables started his statement.

Gundy had reportedly read aloud a racial slur that is considered very offensive to everyone during a team meeting. Venables stated that this behavior does not represent the values and attitudes of the university or the football program.

"Coach Gundy resigned from the program because he knows what he did was wrong. He chose to read aloud to his players, not once but multiple times, a racially charged word that is objectionable to everyone, and does not reflect the attitude and values of our university or our football program. This is not acceptable. Period," Venables said.

Venables continued that Gundy did the right thing by stepping down from his position as the program's head coach. He also knows his actions did not represent the university's values and attitude. Despite this, he will remain a part of the program and continue to set an example for the young men in the organization.

"Coach Gundy did the right thing in resigning. He knows our goals for excellence and that coaches have special responsibilities to set an example. He also knows that, while he will always be a part of the OU family, that his words affected many of us and did not represent the principles of our university. Again, his resignation was the right thing to do, and we will move forward positively," said head coach Venables.

According to Gundy, he accidentally said the racial slur once. Venables also stated that the players were hurt, though a counter report claimed they wanted him to stay in his position. Gundy had reportedly repeated the word multiple times.

Since 1999, the 50-year-old Gundy had been the head coach of the Oklahoma football program. He was a part of Bob Stoops' and Lincoln Riley's staff. It's believed that Venables wanted to get rid of Gundy, as he was under increasing pressure to keep him around.