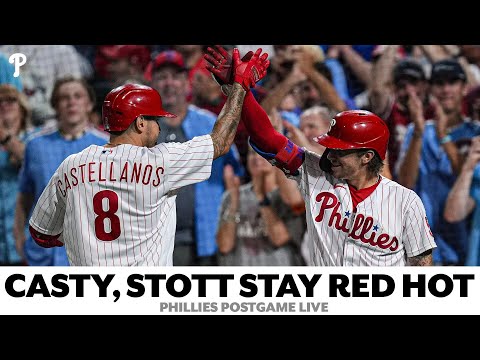 Noah Syndergaard threw strong pitches in seven innings, allowing the Philadelphia Phillies to defeat the Cincinnati Reds 4-1 on Monday. It was the opening game of the four-game series between both teams.

Syndergaard allowed three hits from the opponent, resulting in one run. He also gained one strikeout. It was the 29-year-old’s fourth start since being traded from the Los Angeles Angels.

The right-handed pitcher commented on his experience at the Phillies, saying, “My time here so far has been amazing. I feel like I’m on cloud nine.”

He also received compliments from other team members, such as Bryston Stott who said, “Noah threw the ball well like he’s been doing for us, and we hit the ball."

In addition to Syndergaard, there were several players contributing to the team, including Nick Castellanos and Stott who scored one home run each. Castellanos scored his 12th home run of the season in the second inning by hitting the ball sent by Reds Luis Cessa. Stott followed suit by sending the ball to the second deck in the right part of the field. It was Stott’s seventh home run this season.

Reds’ coach, David Bell, complimented Castellanos who used to play for his team in 2020 and 2021. Bell explained that Castellanos had always been a good hitter. Although Bell admitted not observing the player closely in the Phillies, he said Castellanos "definitely looks like the same guy".

During the 2021 season with the Reds, Castellanos collected 34 home runs and 100 RBIs. Castellanos signed a five-year contract worth $100 million with the Phillies in the last offseason. He reportedly struggled to adjust to the Philadelphia team and even received boos from fans.

However, he said that he started to find his rhythm in the team. He told reporters that “familiarity and comfort” were the most important thing for him to play well.

The Phillies’ victory last night allowed the team to rebound after losing a home series against the New York Mets 3-1. Currently, the Philadelphia team is third in the NL East, recording 67-55. With their stats, they moved ahead of the San Diego Padres to get second place to win the NL wild card.

Recently, the Phillies also announced that they could finally put slugger Bryce Harper on a rehab assignment at Triple-A Lehigh Valley, starting on Tuesday.

There is a high chance that Harper will return to the team next week for a series against the Arizona Diamondbacks. He reportedly will take a Sunday off after his rehab assignment.

About two months ago, Harper underwent surgery to fix his broken left thumb. He sustained the injury during a game against the Padres when a fastball from Blake Snell hit him.

Before his hiatus, Harper recorded a batting average of .318, 15 home runs, and 48 RBIs. He is also a seven-time All-Star player who won the MVP title twice.