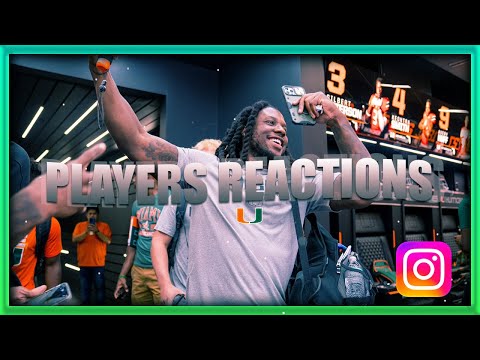 The players of the University of Miami were introduced to their new locker room on Sunday, named after Dwyane Johnson, a former UM athlete and professional wrestler.

The facility, located in the heart of Miami's athletic department, is designed to provide the players with a state-of-the-art locker room. In addition, the university announced a $1 million gift to help fund the weight room renovation for the men's and women's basketball teams.

According to linebacker Corey Flagg Jr., the new facility is a huge improvement over the previous locker room that the team had.

Jim Larranaga, the head coach of the men's basketball team at the University of Miami, said that the school has made a significant statement in recent months. He added that the hiring of Mario Cristobal as the football team's new coach was a big news story in the country.

"I think the University of Miami has really made a statement over the last several months," Larranaga said. "First with the hiring of Mario Cristobal as our football coach. From a national standpoint, that was big news. Not only in Miami but throughout the country."

Additionally, the university's hiring of Dan Radakovich as its new athletic director was a major step in the department's evolution.

"That was followed up by the hiring of Dan Radakovich as our athletic director," Larranaga continued. "He's built tremendous facilities throughout his career, most notably at Georgia Tech and Clemson. Now his vision for the University of Miami's athletic department is to go in that same direction."

The football team's locker room is one of the areas that the athletic director is currently reviewing as part of his department's ongoing facility upgrades.

Stephen Symons, an alumnus of the university, and his wife, Susan, donated $1 million to help fund the men's basketball team's weight room renovation. The facility will feature a recovery area, a strength and conditioning room, and a nutrition bar.

As a coaching staff, Larranaga and his staff tried to send a message to prospective recruits about the university's commitment to the basketball program. In addition to the weight room, the coach said that the school's other facilities, such as the training room and the academic center, can also help convince potential students that Miami is a serious player in the national race.

The coach also said that the university's facilities are important to building championship-caliber programs.

"In college athletics, there is no standing still," Larranaga said. "If you're standing still, you're falling way behind. This is our way of taking a very positive step toward building championship-caliber programs."