The Carolina Hurricanes defeated the New York Rangers 2-1 in overtime in Game 1 of their second-round playoff series at PNC Arena on Wednesday to take a 1-0 lead.

For more than two and a half periods, the Rangers held a 1-0 lead over the Hurricanes. Scoring the goal was Filip Chytil. However, Carolina scored three minutes into the third period to tie the game at 1-1 and force overtime.

With just three minutes left, Hurricanes defenseman Ian Cole scored the game-winner for Carolina. The Rangers were blasted for their terrible defensive tactic in the third period as they allowed Carolina to take control of the game’s dynamic.

"[Hurricanes defenseman Brendan Smith] shot it and it bounced right to me," Cole said.

"I was looking to pass it to someone, and no one was really anywhere dangerous. I was like, I guess I'll throw it on net and see what happens. Hockey is a game of weird bounces, and it just happened to go in. Not the prettiest, but we'll take it."

Antti Raanta, the Metropolitan Division's top seed, made 27 saves for the Hurricanes. On the other hand, Sebastian Aho scored with 2:23 left in the third period to make it 1-1. Aho scored less than 30 seconds later when rookie Seth Jarvis fed him the puck and went to his backhand side. 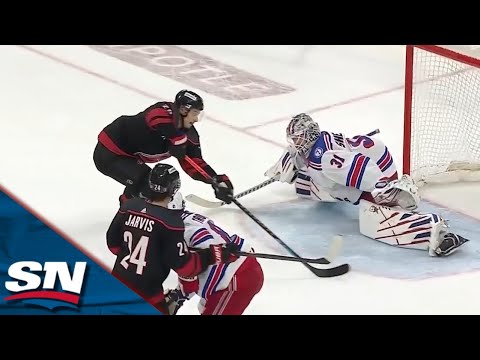 Rangers goalie Igor Shesterkin stopped Aho from getting to the net while he was cutting to the backhand side, but the forward put in the rebound at the right post.

"We raised the level of our game, the intensity, and played with a little more desperation," Carolina coach Rod Brind'Amour said. "We were lacking a little of that for two periods. It doesn't always work out, but we had a real good third period obviously."

Challenging game for both teams

Both teams advanced through an arduous seven-game first-round series, with Carolina prevailing over Boston on Saturday and New York prevailing over Pittsburgh in overtime the following day. Friday is Game 2 of the best-of-7 series.

"Definitely a tough loss," New York coach Gerard Gallant said. "We've been there, done that. We've got to battle back. I was really happy with our game. [Carolina] put a big push on in the third period the first 10 minutes, and we weathered that storm. But the first two periods was perfect hockey for us. I thought it was our best game of the year, I really did."

Neither in the series nor in their four home victories did the Hurricanes trail. The Rangers had to win three straight games to come back from being down 3-1 in the series. Shesterkin, who was a finalist for the Vezina Trophy for the league's best goalie and the Hart Trophy for the league's most valuable player, bounced back after giving up 10 goals in Games 3 and 4.

At the start of this game, though, it was the Hurricanes who looked slow, while the Rangers moved the puck well and eventually gave up a few good chances.

When defenseman Tony DeAngelo tried to pass the puck back to teammate Jaccob Slavin to start over, Rangers forward Alexis Lafrenière stole the pass and led a 3-on-2 rush. At 7:07 of the first, Lafrenière passed the puck to Chytil, who one-timed it from the right side past the extended sticks of Slavin and Raanta.