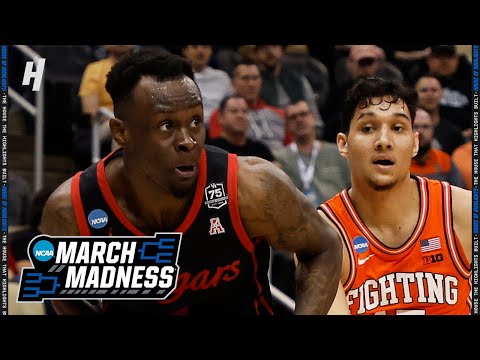 Before the tournament begins, some people get a little upset with how the selection committee selected some teams. Kelvin Sampson's team was able to secure a spot in the tournament after going 26-5 during the regular season. Despite their impressive record, the committee decided to place the Houston Cougars as the No. 5 seed in the South Region.

The Houston Cougars have been one of the most impressive teams in the tournament. Their performances have raised their profile and could influence March Madness bracketology.

Houston's victory over Illinois in the second round was not as shocking as some of the other upsets. Still, many people believed that the Fighting Illini could make a run at the Final Four.

Houston started the match with a 23-11 run, which overwhelmed Illinois' guards. The team then gained control of the game by holding the Fighting Illini scoreless for the last four minutes.

Under the leadership of Sampson, the Cougars were able to create their own shots and score in transition. Aside from dominant defense, Houston also got offensive boards.

The team's efficiency numbers suggest that the selection committee should not emphasize conference records.

The selection committee typically focuses on the quality of wins throughout the season. Having a power conference also allows teams to rack up victories.

On the other hand, Houston doesn't play in a power conference. The team lost to rival Memphis twice during the conference season and then defeated the other team in the tournament.

According to data collected by Barttorvik.com, Houston was regarded as one of the country's best offensive and defensive teams in 2022. Various metrics such as KenPom and the Basketball Power Index also praised the team.

For comparison, the Fighting Illini had plenty of wins but were last in offensive efficiency during the January-March period. Their performance against Houston was inferior since they only managed to score 53 points in the game.

Despite losing two key players during the season, Houston still managed to win. The team's success can be attributed to the players' perseverance.

During the second half of the game, Illinois' RJ Melendez made a fastbreak basket to cut Houston's lead to four. After making a dunk, he then had to pull up on the rim to prevent himself from crashing to the floor.

Unfortunately, the officials called it a technical foul. Side court commentator Reggie Miller was not pleased with the call and expressed his thought immediately after the call was made.

"No. No, no. Absolutely not. I'm sorry," Miller said. "First of all, his momentum is taking him with him. He has to swing back. You cannot give this young man a technical foul for this. He's not showing off or anything. If he doesn't, he is going to almost kill himself. You gotta swing on the rim here."

The foul seemed to be a turning point for Houston. After making the technical free throw, the Cougars could pull away from Illinois and advance to the Sweet 16. The Fighting Illini only managed to score 11 points during the last nine minutes of the game.