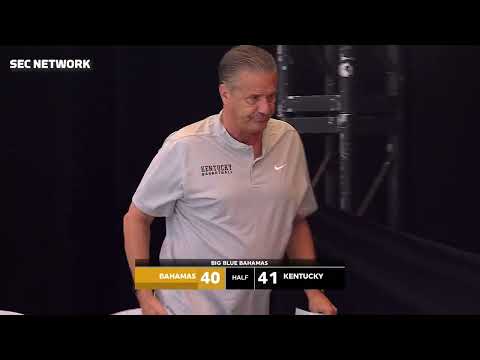 The Kentucky Wildcats brought home four summer game victories from their trip to the Bahamas last week. Below are five key takeaways from the tour.

The Wildcats have two five-star freshmen this year, Cason Wallace and Chris Livingston. Wallace recorded consistent performance throughout the trip. Similarly, Livingston showed off his stellar dribbling and floater skills.

"I love what Chris Livingston did," head coach John Calipari said. "He came in, everything he did was one hand. . . Couldn't be more proud of him."

Kentucky ranked 101st in 3-point shooting percentage last season and 172nd the year before that. The last time they were within the top 100 was in the 2015-2016 season.

The team needs an upgrade in this area, especially since in their loss against the Saint Peter’s Peacocks in March Madness they only made four 3-point shots out of 15 attempts.

On the tour of the Bahamas, however, the Wildcats' 3-point shooting percentage went up to 38.1 percent. They went 11-of-26 in the first game against the Dominican Republic Select Team, 7-of-26 in the second game vs. Tec de Monterrey, 15-of-30 in the third game with Carleton University, and 7-of-23 in the last one.

The second year Daimion Collins did not perform well last season as a rookie, playing an average of 7.4 minutes per game. Initially, he was expected to provide significant support to his team.

However, Collins regained more confidence in the trip, showing good leaping ability. Analysts have predicted the player will be able to show off more of his skills if he is given more chances to play on the court next season.

Jacob Toppin was also another player that showed improvements in the trip. The 6-foot-9 forward made some knockdown shots during the games.

When facing Carleton, The Rhode Island transfer scored 27 points. He made 11 out of 14 attempts, and five of his successful shots were from deep. Then in the final game against the Bahamas, Toppin contributed 20 points to help his team claim the win.

The upcoming season will be Toppin’s final year with Kentucky.

Earlier this year, senior Oscar Tshiebwe was named Naismith National Player of the Year. He is the fan favorite to join Ralph Sampson in winning the honor in consecutive years.

The center recorded 45 rebounds in the four games in the Bahamas. Within only 22 minutes into the game against Carleton, he managed to record eight points and 13 rebounds.

In other news, leading point guard Sahvir Wheeler returned to the team this season. Reportedly, he will be one of the starting players for the 2022-23 season.

Kentucky’s first game next season will be against the Michigan State Spartans on November 15.