Carolina’s Raanta, Jarvis out for injury as Rangers eliminate Hurricanes in Game 7 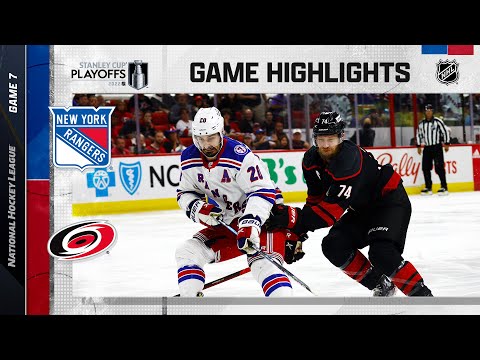 The Carolina Hurricanes goaltender Antti Raanta sustained a lower-body injury during Monday’s matchup against the New York Rangers that led to Carolina’s heavy defeat 6-2 in Game 7. Losing the game also had the Hurricanes being eliminated from the second-round series.

To make things worse, the Hurricanes also had forward Seth Jarvis out due to injury. Hosting the visiting New York marked a grim history for Carolina. Other than the heavy defeat to wrap the playoff series, the Hurricanes had two of its star players out when the team tried to catch up with the leading Rangers.

Carolina coach Rod Brind'Amour confirmed post-game that the Finnish professional goalie suffered a serious injury and even if the team were to advance to take on the Tampa Bay Lightning in the Eastern Conference final, he would not risk pulling out Raanta to play. The team disclosed how severe Jarvis’ injury was, but from the looks of how he was struck, it could be similar than Raanta.

“No chance,” Brind'Amour said. “He's going to get checked out tomorrow. That knee would've been out probably—I don't know for sure, but he didn't look too good walking out of here, or limping out.''

Hurricanes suffer defeat to Rangers, Raanta, Jarvis out due to injury

The Monday matchup began with New York securing the game’s early game lead. The hosting team was unable to hold off the Rangers’ 2-0 lead in the first period or register goals to level the playing field.

New York defenseman Adam Fox and left winger Chris Kreider were responsible for the club’s two points lead in the first period. Only eight minutes into the first period, the duo were quick on their toes to hit a successful power-play double goal for the Rangers at 4:20 apart.

Entering the second period, Caroline was short on hitting successful offensive play to the visiting team and unfortunately had to also witness two of its players exit the game due to injury.

The first to leave the game was Jarvis who was struck hard by defenseman Jacob Trouba at 7:24 in the first period. Trouba did not score but was responsible for five blocked shots and a hit on Jarvis. The Carolina professional forward was forced to leave following an upper-body injury.

"He might be on the smaller side, but he's feisty and he's got a lot of heart," defenseman Jaccob Slavin said about Jarvis. "Obviously he's a big component of our offense—It shouldn't change the outcome of the game but we definitely feel when his presence isn't there.''

In the second period, the Hurricanes were forced to put Raanta on the side of the court after he was seen limping. The team’s trainer helped the goaltender off the ice and Carolina employed Russian rookie goalie Pyotr Kochetkov.

Kochetkov was bested by centerman Ryan Strome after hitting the field at 16:19 of the period. Strome’s goal marked New York’s 3-0 lead. Carolina showed heavy resistance in the third period when left winger Max Domi and centerman Vincent Trocheck each made a single goal only to have the Rangers retaliate back by adding three more goals.

“Tonight was kind of just some bounces, everyone wasn't quite there, including myself,” Hurricanes team captain Jordan Staal said. "An unfortunate way to end the series—season.”

Brind'Amour shared that the defeat and everything his men had been through was a tough blow for them. Finishing the playoffs series with heavy defeat is another thing, but sustaining two injuries on two players is a completely different thing on its own.

"That kind of summed it up right there on that shift,'' Brind'Amour said. "That was a tough blow in this game.''