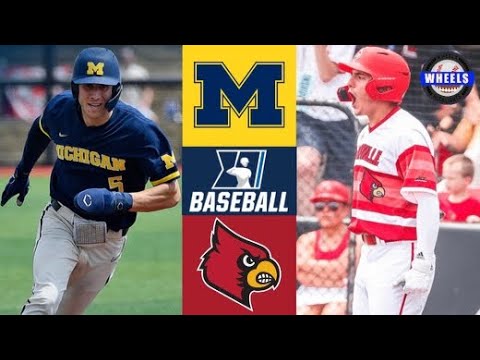 The Michigan Wolverines were only four outs away from a ticket to progress to the NCAA’s Super Regionals when the team played the Louisville Cardinals. Michigan had to face a controversial call and was unable to bounce back following a forced four-run inning for Louisville.

The regional host Cardinals claimed their second win in a row over the Wolverines on June 7. Their second matchup, which saw Louisville winning 11-9, witnessed an unexpected call in the eighth inning.

The umpire ruled that Cardinals hitter Jack Payton’s two-out walks that extended the inning were safe after a video review was carried out to see whether Wolverines infielder Ted Burton had tagged him at the second base. Going on from there, Louisville managed to take over the lead from Michigan.

Michigan was desperate to clinch up another win to claim the Louisville Regional title and proceed to the Super Regionals to join the likes of the Tennessee Volunteers.

The Wolverines had a great run throughout the innings, with star pitcher Cameron Weston managing to retire a whopping eight Cardinals batters, two of whom were sent out in the eighth inning.

However, the controversial call gave Louisville the lead. Michigan then failed to bounce back after the hosting team extended with a four-run inning.

Cardinals hitter Jack Payton had a double off the left-field wall after hitting two-out walks, which extended the inning. Wolverines infielder Ted Burton came with a strong relay at the second base that led to a close play at the base. The umpire ruled Payton was safe after.

ESPN+ announcers thought otherwise after playing the video over and over—yet the umpire’s call remained. The game proceeded to the Cardinals’ next batter, Levi Usher, registering a single to tie the game. Teammate Cam Masterman delivered a heavy blow to Michigan with a two-run home run away to the left field. The duo’s hard labor had Louisville leading over Michigan.

The original call from the umpire stood still after the game. According to the NCAA rulebook, however, the decision is still a subject to change as long as there is "clear and convincing evidence to change the original call that was made on the field of play".

Michigan finished rather poorly despite their early to mid-game lead. The team allowed seven runs in the first inning and two sub-par batting performances in addition to a single error. Nonetheless, the call was a disappointing end for both the team and head coach Erik Bakich.

“I haven’t had a chance to see it. Had he called him out and Louisville would have reviewed it, the call would have stood. He called him safe and they reviewed it. The rule is very clear that it has to have clear evidence. I am sure that is what was said. That being said, yeah, it really sucks,” Bakich said.

Despite the defeat, Bakich said that he was proud of his men. He also congratulated the Cardinals, who defeated his side twice.

“I am very proud of our team. What you saw today was a microcosm of the whole season. The ability to take a punch and get knocked down and get up off the mat and keep fighting and no quit -- just the toughness and resiliency of the group,” Bakich added.

“The lessons they have learned over the last three weeks is knowing that they are never out of the fight. I couldn’t be more proud. It sucks the way it ended, but congratulations to Louisville.”

Up next, Louisville will play Texas A&M Aggies in Super Regional.