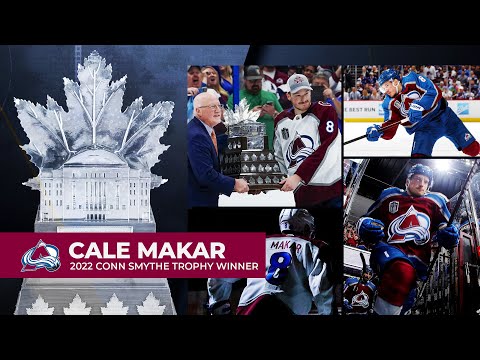 The Colorado Avalanche did not come in short to snatch this year’s Stanley Cup away from the final rival Tampa Bay Lightning. Winning the title was also a personal achievement for the Avs defenseman Cale Makar after he was voted by a panel of Professional Hockey Writers Association members as the awardee of the Conn Smythe Trophy.

Awarding Makar with such an award was due to his outstanding play in the playoffs. According to the association, Makar is the first unanimous winner since 2017. Moreover, in the voting, the defenseman snatched all 18 first-place, which led to him winning the award.

In 20 playoff games of the Stanley Cup, Makar made 29 points and at only 23-year-old, he is the youngest defenseman to have won the Conn Smythe Trophy. Joining former players such as the likes of Canadian legend Bobby Orr in 1970 and Swedish Nicklas Lidstrom’s feat in 2002, Makar is the third player in the NHL history to not only win the Norris Trophy, but also playoffs MVP in a single season.

“It’s surreal to me,” Makar said. “You grow up, you see that as a kid, you have pictures on your wall. All I could think about was everybody that got me here.”

Makar was signed by the Avalanche in April 2019 with a three-year entry-level contract. The franchise picked him off fresh from playing for the UMass Minutemen, a team representing the University of Massachusetts in the NCAA Division I.

Despite hitting the professional hockey scene only three years ago, the Calgary native is one of the Avalanche’s centerpieces and will likely stay that way next season.

Receive praises from people in NHL

Avalanche head coach Jared Bednar shared how the franchise laid eyes on Makar, praising the young player for his dynamic play and how elite is the Canadian in both offense and defense.

“We’ve seen him play this way from Day 1 of the season,” Bednar said of Makar. “This guy is elite, and with him, the job he does for us offensively and defensively, watching him play, how dynamic he is, he’s just the best defenseman in the game right now.”

Club’s general manager Joe Sakic also sang high praise for Makar who has not only won the Norris Trophy, Stanley Cup, and Conn Smythe Trophy in his career—but also when he was named the rookie of the year, taking with him the Calder Trophy. All of these happened before the Canadian star turns 24.

“I don’t think anything goes to his head. Cale is a hard-working, humble guy. He does not pay attention to any outside noise,” Sakic said. “He deserves everything he’s getting. Such an unbelievable hockey player, and he plays both ways.”

Makar’s feat in the sport has captivated many, from fellow players and higher-ups in the Avalanche, analysts, and even West Conference rivals. Edmonton Oilers defenseman Tyson Barrie was one of the many athletes that praised Makar for his play, adding that the Canadian is a great all-rounder.

“He’s an amazing player. Since he’s been in the league, he’s been exceptional and it’s amazing the way he’s creating offense and still playing defense,” Barrie praised Makar. “He’s as good as they come on the back end and the way he skates and moves the puck and retrieves the puck, he’s got every tool.”

It is safe to assume that Makar is far from finished. After winning Colorado’s third Stanley Cup title, the Canadian is looking to bring back its fourth in the next season.