It was always a long night for Arizona when it took on Oregon. After suffering a seven-game losing streak to the Ducks, the Wildcats finally broke through against Oregon with an 84-81 win at the McKale Center. Arizona head coach Tommy Lloyd noted how proud he was of winning a hard-fought battle and snapping the losing streak to Oregon. "I was proud of our guys for hanging in there and finding a way to win a close game," he said. "We haven't had a lot of those." While the Wildcats shot over 50% from the field, they could hold off a resilient Oregon team that played much like the team that was picked to finish second in the conference. Guard Bennedict Mathurin led the way for Arizona with 24 points, five assists, and seven rebounds. He knew that the Oregon team was good, and the only way to beat them was to execute their game plan. "I knew Oregon was a pretty good team," said Mathurin. "They just had a bad game against ASU. So I knew they were gonna come here and have a good game. So we had a plan and our goal was to stick to the plan." The defense of Arizona was key in holding the Ducks to 45.6 percent shooting from the field. While Mathurin led the way, four Arizona players contributed double figures. Forward Azuolas Tubelis scored 14, guards Dalen Terry added 13, Pelle Larsson chipped in 11, and center Christian Koloko had 10. 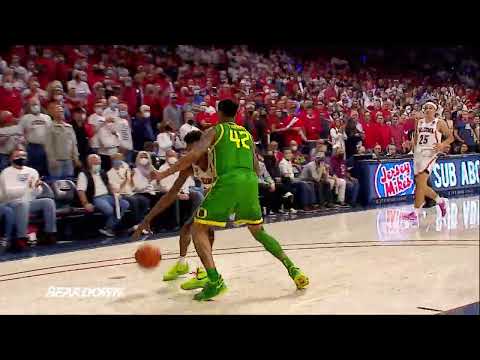 With 1:26 left in the game, guard Kerr Kriisa hit a 3-pointer to give the Wildcats a 79-76 lead, but, on Kriisa's next possession, Oregon's Jacob Young stole the ball from him and scored a layup to make it a one-point game. Then, Mathurin secured an 80-78 lead for the Wildcats with a couple of free throws with 42.1 seconds left in the clock. On Oregon's next possession, the team could not score. After Tubelis made a free throw with 38 seconds left, the Wildcats led the game by three points at 81-78. At this point, the Ducks had a chance to tie the game. However, Young could not find an open teammate on the team's next possession. Young decided to drive for a layup but could not sink the ball and turned it to Arizona. In desperation, the Ducks then fouled Larsson. He made two free throws to give Arizona an 83-78 lead with 19 seconds left. The game was almost over before Oregon's Quincy Guerrier made a three-point shot with 15 seconds left. The transfer from Syracuse had a great game for the Ducks. He finished with 21 points on 6-for-11 shooting from beyond the arc. After the Guerrier's last shot, Arizona's Dalen Terry hit two free throws to give the Wildcats an 84-81 lead with 18 seconds left. Oregon could tie the game with a three-pointer at this point. Unfortunately, Richardson committed a turnover to hand Arizona its victory.

The win moved Arizona to 24-2 overall and 14-1 in the conference. With five games left in the regular season, the Wildcats are now in a good position to win the conference title. After dropping to 17-10 and 10-6 in the league, the Ducks are now in danger of missing out on the NCAA Tournament. They will need to win their remaining games and hope for some help from the other teams. The Wildcats were selected as the top seed in the South Region of the NCAA Tournament during the early bracket reveal on Saturday.