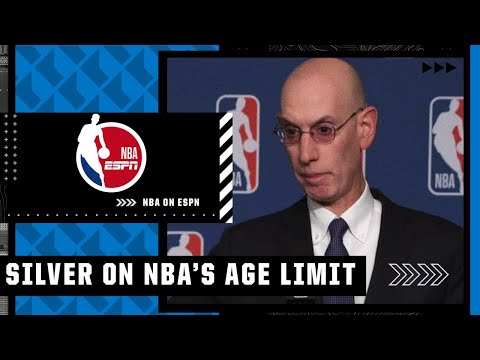 The current age limit to enter the NBA draft is 19 years old, and league commissioner Adam Silver has said he wants to lower it.

He said he hoped the age limit would be dropped to 18 in the league’s next collective bargaining agreement. He said Tuesday during an annual news conference in Las Vegas that it was “the right thing to do.”

"I think there's an opportunity [to change it]," Silver said to ESPN. "It's [based on] larger conversations than just whether we go from 19 to 18, but I'm on record.

"When I balance all of these various considerations, I think that would be the right thing to do, and I am hopeful that that's a change we make in this next collective bargaining cycle, which will happen in the next couple years."

Initially, the age limit was changed from 18 to 19 in 2005 after many players, such as Kevin Garnett, Kobe Bryant, and LeBron James, went directly from high school to the NBA. The Detroit Pistons also drafted Amir Johnson as the No. 56 overall pick that year, and he was the last player to be selected from high school.

At the time, the then commissioner David Stern agreed to raise the age limit to 20, which was met with resistance from the players. As a result, 19 became the accepted limit.

Silver was named commissioner in 2014. Earlier, he said he wanted to increase the age limit to 20. He has started to think differently since.

"It may be the case that it's in all of our interests that we start impacting with these young players,” he said. “Especially because in our sport they are identified at such a young age and begin working with them on their development then.

"Not just basketball skills but increasingly there's a focus on their mental health, their diets, just helping them build character and all of the important values around the sport."

Silver said the talks about changing the age limit are still in their early stages and would be brought up in the upcoming college bargaining discussion.

Players are currently required to spend at least a year out of high school before entering the NBA draft. Many players opt to play professionally overseas in the G League instead.

The NBA has introduced a change to the transition take foul rule. The new penalty for the take foul is one free throw. Any player on the offensive team may attempt and continue the possession at the time the foul is committed. The league’s board of governors approved the change on Tuesday. However, early in June, Silver told The Associated Press that the new rule was subject to change.

"People are thrilled that as we head into next season. It looks like we'll be on our normal track in terms of when the season starts, in terms of our protocols around the game, particularly around the health and safety of our players," Silver said.