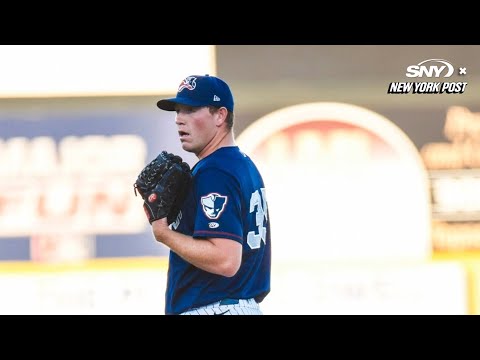 New York Yankees prospect Matt Sauer, who plays for the Somerset Patriots, has set a new record by striking out 17 batters on Thursday in a Double-A game against the New Hampshire Fisher Cats.

“I never thought a record was on the table at all," Sauer said. "I was just trying to go out there and do my job, throw strike one.

“This is only my third start at Double-A, so it's really a blessing and an honor that I was able to do this. I just want to keep it going for the rest of the year. I just got to build off of this."

According to the Patriots, Sauer’s strikeouts that night were the highest record in the team’s history, including when they were still in the Atlantic League. The Yankees’ Double-A affiliate also claimed that the record was the highest strikeouts per pitcher in a game for any starter in major and minor leagues so far in this season.

Other than Sauer, DSL Tex Blue’s Jordy Arias is the only pitcher who struck more than 14 batters in a game in 2022. Arias also gained 17 strikeouts in the Dominican Summer League, a rookie-level league.

Sauer pitched five perfect innings, allowing only one run in the eighth inning. His stay on the mound ended when opponent Sebastian Espino hit a home run in the sixth inning. Since teammate Everson Perera, a No. 5 prospect in the Yankees, managed to gain two runs in the third inning, Sauer left while the Patriots led 2-1.

Despite that, the Patriots were defeated by the Fisher Cats 4-3. Carson Coleman, who replaced Sauer, allowed one run by the Fisher Cats in the ninth inning. It eventually led to a “home run-robbing catch” that gave the game extra innings.

Espino batted again, earning a two-run single that eventually led New Hampshire to win the game, causing Patriots’ pitcher Steven Jennings to be tagged for the loss while Jimmy Burnette got the win.

It was Somerset and New Hampshire’s third meeting in the six-game series. The Patriots defeated the Fisher Cats in the previous games, 10-6 and 3-2. Currently, Somerset is second in the Eastern League Northeast with 27-20, while New Hampshire ranks fifth in the same division with 20-28.

The 1999-born player said he began to focus on pitching during his junior year of high school. He told the media he played baseball "since [he] could walk”. Sauer said he is living out his “childhood dream” and feels confident about getting to the major league.

According to the Patriots pitching coach Gerardo Casadiego, Sauer has been working to improve his pitch. The pitcher said he was not satisfied with his performance at the start of the second half. In his last two starts, Sauer only gained two walks.

He can be a good starter in the big leagues, for sure," Casadiego told reporters. "This is a type of starter that goes there and competes in the big leagues. He still has some things to improve on, but I think his ceiling is very high."