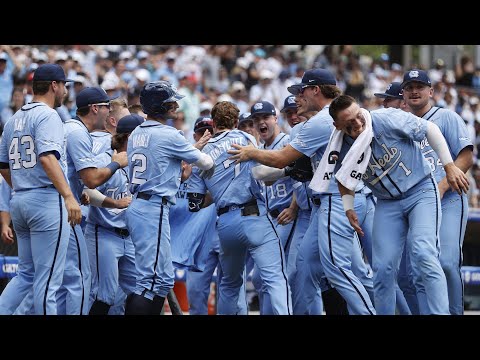 The North Carolina Tar Heels defeated state rival NC State Wolfpack 9-5 on Sunday. The victory marked the Tar Heels’ official entry to the NCAA Tournament after an outstanding run in the ACC.

The victory over NC State marked UNC’s seven consecutive game wins and eighth time winning the ACC Tournament. The Tar Heels wrapped the tournament with 38-19, winning 15 out of 17 games. The program is slated to advance to the NCAA Tournament, with further pairing information will be announced this Monday.

UNC head coach Scott Forbes finally get to taste his first ACC Tournament win after two years of coaching for the program since he was signed in the summer of 2020. Forbes replaced the then-veteran coach Mike Fox, who retired from coaching the team.

Honeycutt had one of his best collegiate career performances on Sunday. The freshman smacked two home runs and five runs early in the first two innings for the No. 8 seed Tar Heels. Prior to Sunday’s matchup, UNC played the top-seeded Virginia Tech on Friday, where he had two home runs.

This season, Honeycutt the freshman recorded a total of double 20s on home runs and stolen bases, making him the first player in UNC to reach such numbers. The 2022 ACC MVP title holder also made history in the NCAA, becoming its first-ever freshman to attain such achievements since 2011.

However, the early-game lead was registered by NC State via a lead-off double by Devonte Brown and Josh Hood’s single. The Wolfpack was 1-0 only to have the Tar Heels retaliate. UNC created a lead of 8-1 as the game continued to the third.

Most of UNC’s actions took place in the second, starting from sophomore center Tomas Frick leading in the bottom of the inning. He reached a fielding error until first baseman Hunter Stokely made his single and infielder Colby Wilkerson loaded the bases without suffering any outs.

Outfielder Angel Zarate singled up to score in the middle as a trio Frick, Stokely, and Wilkerson made a double via shortstop Danny Serretti. Honeycutt would come out to hit and made a three-run over the wall to the left.

Brown, who was responsible for the team’s early lead, was restricted by the Tar Heel's' dominance as the limping Wolfpack failed to register any points until hitting their two later in the ninth.

Brown, Hood, and LuJames Groover III contributed a single RBI. While teammate J.T. Jarrett made two. After the defeat, the program is now on its 30 years without snatching any ACC regular season or tournament title in football, baseball, and basketball.

The program tried its fortune, but it was not enough to stop the Tar Heels from advancing into the NCAA Tournament. In the week leading to playing NC State, UNC hit .324 and made extra 19 base hits. The team averaged 8.8 runs per game.

The top-performing team in the ACC is an all-rounder program with capable pitchers who regularly allow five extra-base hits across 36 innings with a batting average of .185.