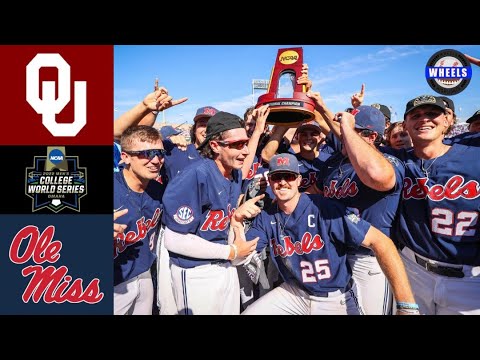 The Ole Miss Rebels have won its first-ever College World Series title after defeating the Oklahoma Sooners on Sunday 4-2. Prior to the matchup, the team had also claimed Saturday’s game with a margin-wide 10-3.

The Rebels managed two scores and overcame the Sooners' unorthodox pitches in a three-run much later in the eighth inning. This was more than enough despite the Sooners trying to close the scoring gap in the seventh.

"I think they've showed a lot of people that you can fall down, you can stumble and you can fail, but that doesn't mean you're a failure,'' Rebels coach Mike Bianco said.

Both teams started the game scoreless in the early to mid-innings. Ole Miss was responsible for the first score in the sixth inning when sophomore shortstop Jacob Gonzalez smacked a homer to the right. In the seventh inning, Oklahoma returned the favor back by scoring two.

Trailing behind the Sooners, the Rebels bounced back in the eighth inning. Gonzalez took over the stage with his single to the right and sophomore center-fielder TJ McCants scored, setting the tie motion in effect.

Gonzalez once again returns to second following a wild pitch made by Oklahoma right-hander Trevin Michael. It was manageable for the Rebels and the team added another score via senior third baseman Justin Bench.

“Kind of knew we were going to start the scoring in the eighth or ninth,'' Gonzales said of Sunday’s matchup. "That's how we are. We're going to put the pressure on. We're not going to strike out and sit down. Luckily, I got a hit and I finally got to help the team out this week.''

To seal the win for the Rebels, Gonzalez made his last score after receiving yet another wild pitch from Michael.

Claiming the win over Oklahoma was not a small feat for Ole Miss. The Sooners were spot on, especially their pitching department.

Aside from Michael who had easy tap into releasing wild throws, redshirt freshman Cade Horton had one of his deadliest throws on this year’s road to CWS. Horton made CWS final record by hitting a whopping 13 strikeouts.

"We made it here, and we accomplished a lot this year,'' Horton said. "But we'll be back. I know that because this team laid the foundation for the future of Oklahoma baseball.''