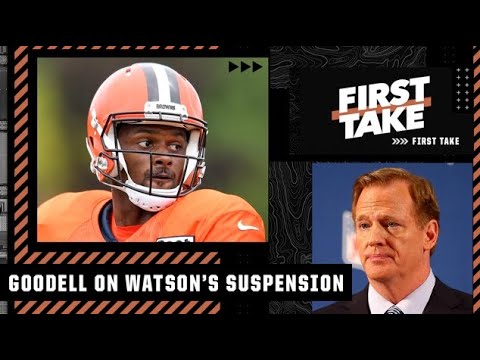 Cleveland Browns quarterback Deshaun Watson’s ordeal captivated and caught the attention of the NFL community. He was punished with six games suspension without pay this season for violating the league’s personal conduct policy following accusations of sexual harassment. Watson’s case also shed some light on how the NFL seems to be out of touch with imposing strict discipline on its player.

The six games suspension was the most recent update of Watson’s case. The former judge turned NFL disciplinary officer Sue L. Robinson was the one who hammered the result. The league was keen to extend it to the entire season but Robinson remains firm with her decision and urged the league to do the same.

The NFL is reportedly still figuring out the QB’s penalty even almost a week after Robinson made her decision as the league still holds its one-year ban plan for the player.

When asked why the NFL had appealed Watson’s six games suspension for at least an entire season ban, Commissioner Roger Goodell said the evidence against the 26-year-old was there, saying that some violations were “egregious”. Goodell even went to an extent of calling the former Houston Texan's displayed a “predatory behavior”.

“We’ve seen the evidence, she was very clear about the evidence, she reinforced the evidence,” Goodell said while referring to Robinson’s decision. “There were multiple violations that were egregious, and it was predatory behavior. Those are things that we always felt were important for us to address in a way that’s responsible.”

“Either party could certainly challenge and appeal that and that was something we thought was our right to do. … So we decided it was the right thing to do,” Goodell added.

ESPN’s Jared Greenspan wrote that aside from pushing “an indefinite suspension” that would extend for an entire season for Watson, the NFL also is “seeking a monetary fine” from the player who had inked a five-year-long contract where he may cash out a $230 million fully-guaranteed.

Concluding Watson’s suspension, Robinson had argued that the player’s act “does not fall into the category of violent conduct that would require the minimum 6-game suspension”. However, the former judge earlier had pointed out and described that the three-time Pro Bowler’s behavior was “more egregious than any before reviewed by the NFL”.

Clearly, while the league is looking for more than six games suspension and was seen unable to impose disciplines following the conclusion of Watson’s conduct, many had questioned whether or not the NFL seems out of touch.

The same can also be said of the Browns who had signed Watson despite his ongoing controversy.

Watson’s case is still developing and is still waiting for the NFL appeal to be reviewed by former New Jersey Attorney General Peter C. Harvey, who was appointed by the league to hear Watson’s suspension. Harvey currently works as a partner at the Patterson Belknap firm in New York.

"[Harvey] has deep expertise in criminal law, including domestic violence and sexual assault, and has advised the NFL and other professional leagues on the development and implementation of workplace policies, including the NFL's Personal Conduct Policy,” the NFL said.