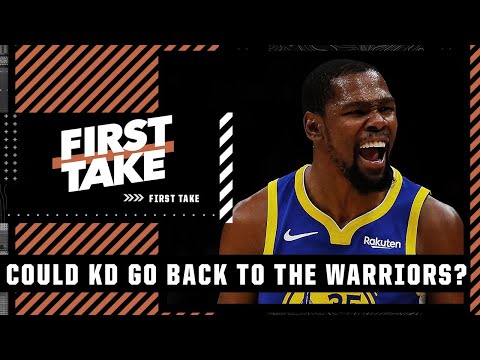 Kevin Durant's return to the Golden State Warriors is anticipated by many, including former NFL wide receiver Harry Douglas. Douglas is looking forward to seeing the reunion, while other fans disagree.

Shams Charania of The Athletic reported the news of Durant's trade request to Nets owner Joe Tsai. Although he does not have a no-trade clause, Durant has said that his favored destinations are the Phoenix Suns and the Miami Heat. There was also a rumored interest from the Golden State Warriors to acquire the 12-time All-Star.

Even though the Warriors haven't done anything to bring KD back to the team, a lot of people have shown interest in the idea.

"Let the reunion begin. Yes, I do," Douglas said in regards to the Warriors-Durant reunion. "I would love to see them back together again to hash out whatever the issues may have been during that time.

"You've got a more competitive Western Conference, and I would like to see that," he added.

While Douglas supports Durant’s return to the Warriors, other supporters disagree. There were speculations earlier this week about the possibility of a reunion.

Given how KD's time with the Warriors ended in 2019, the notion of Durant rejoining the team would likely come as a surprise, according to The Athletics' columnist Marcus Thompson II. However, considering how the league operates, a reunion with the Warriors is not out of the question.

Why Warriors would want Kevin Durant back

The Warriors had acquired the All-Star forward Durant just after the Golden State lost Game 7 to the Cleveland Cavaliers in the summer of 2016. The deal shocked the entire league. Since the trade, the Warriors disrupted the NBA's competitive equilibrium by quickly becoming the favorites to win the 2017 title.

In 2018, KD and the Warriors went on to win back-to-back championships, including a series-clinching victory over the Cleveland Cavaliers. Durant was the Warriors' top player during two championship runs. He won two Finals MVP awards and was the team's leading scorer.

They sought to make it three wins in a row in 2019 but were severely injured in the process. Thompson tore his ACL, while Durant ruptured his Achilles tendon during the game.

The Warriors now have an opportunity to take advantage of their recent success by bringing back KD, which may give them another shot at a title and two more years of dominance in the NBA. They'd have to part with their talented young core from last season to do so.

The Warriors might have the ability to assemble one of the most attractive trade packages possible for Durant. However, the Warriors have shown no sign in the past three years that they are willing to pay the price required to get KD back to the team. The price includes All-Star, young talent, and several draft picks.

Jordan Poole, James Wiseman (center), Jonathan Kuminga (forward), and Moses Moody (forward) are four of the team's most highly coveted young players. There has never been a time in NBA history when Andrew Wiggins' value has been higher than it is now. In a deal, the Warriors fall short because of their lack of draft picks. At the very least, Stephen Curry's contract will save the Warriors for another four years.

In Thompson II's opinion, the question is whether the Warriors is ready to give up anything after winning a championship by combining their championship core with young players. The other major concern is whether the locker room leaders would embrace Durant if a trade were possible.