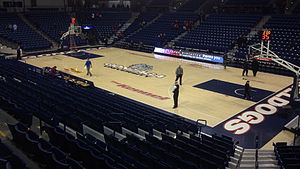 It was senior night for three key Gonzaga men's basketball team members. Drew Timme, Rasir Bolton, and Andrew Nembhard helped the top-ranked Bulldogs defeat Santa Clara on Saturday. Timme led the way with 23 points, while Nembhard and Bolton added 21 and 18 points, respectively, as the Zags defeated Santa Clara, 81-69. "It was good for them to step up and make plays like that," head coach Mark Few praised the team's seniors. The win secured the sixth straight regular-season title for the Zags and their 21st overall under Few. This season, they have also secured at least a share of the conference title for the 10th time. Now, the Bulldogs head to the conference tournament with an all-time record of 61-16. Few noted that the regular-season title is still significant for the team regarding the win. He mentioned that this year's edition is already considered the best in the conference's history. "It means probably even more this year," the 59 years old coach said. "On the one hand, we're saying this is the best the league's ever been in 32 years, or at least since I've been here." Gonzaga freshman center Chet Holmgren had a double-double with ten points and rebounds following its seniors' outstanding performance. The loss dropped Santa Clara to a tie for third place in the conference with San Francisco. Despite the lack of NCAA recognition, the team has surprised many by becoming a legitimate contender in the league. Their victories over Saint Mary's and BYU have shown the program's potential under coach Herb Sendek.

The key to slowing down the fast-paced offense of the Zags is to not allow them to touch the ball. This strategy works as long as the team doesn't commit numerous mistakes. Slowing Zags' tempo requires a lot of precision, and it's almost impossible to do it for 40 minutes straight. Instead of locking down all aspects of Zags' offensive caliber, the Broncos challenged its opponent to shoot behind the arc. During the first meeting between these two teams, Gonzaga was able to take advantage of the opportunities presented to them from beyond the arc. However, during the match on Saturday, the Bulldogs were struggling to shoot threes. "They were kind of daring us from the 3-line, especially early, and we took a lot of them," Few noted regarding his team's three-point shooting. "We made every shot when we played them the first time, and tonight we didn't." The Santa Clara defense was able to force the issue by forcing the host to take tough shots from deep. Aside from that, they could also limit the number of open looks. The patience of the Broncos eventually paid off as the offense started to sputter. The host was forced to settle for unconventional jumpers as the Santa Clara defenders guarded them effectively. Santa Carla's PJ Pipes and Jalen Williams led the offensive charge for the team. Pipes scored 27 points, and Williams added 15. Pipes' performance was recognized by the opposing coach. "Pipes is really, really playing well," Few praised the opposing player. "He hit a lot of tough shots." Sendek was proud of his team's effort. Despite losing, he was still satisfied with their performance. "We battled all the way through until the end," he said. "It's tough playing against a team like Gonzaga but I couldn't ask for more from my guys."