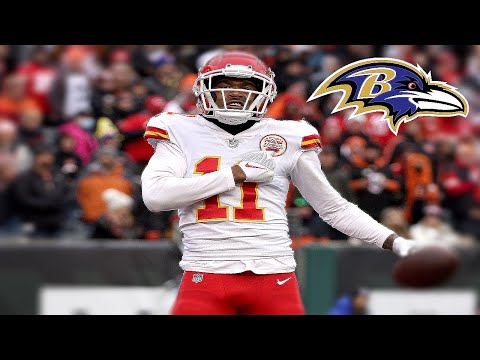 According to Ian Rapoport of the NFL Network, the Baltimore Ravens signed wide receiver DeMarcus Robinson from the NFL free agency pool. Robinson agreed to terms to join the Ravens on August 19

Furthermore, Katz Brothers Sports, Robinson's agent, announced that their client has reached an agreement with the Ravens to confirm his arrival.

According to Yates Field of ESPN, Robinson signed with Las Vegas Raiders this offseason and was released on August 16 as part of the team’s roster reduction to 85 players.

He was listed as one of the Raiders’ wide receivers on the training roster before being waived and reached by the team's management.

Robinson, who was selected as a fourth-rounder in the 2016 NFL draft, is mostly known as a wide receiver for the Kansas City Chiefs. He played for six seasons with the Chiefs and started 29 games.

With Robinson joining the Ravens’ roster, statistically, he is one of the most experienced wide receivers for the franchise. In total, he recorded the most receptions for the team with 145 passing received, 1679 receiving yards, and 14 touchdowns (14).

Playing as Chiefs’ receiver, Robinson was a consistent player who received passes from quarterback Patrick Mahomes and was involved in between 40 percent and 70 percent of offensive plays that were set by Mahomes.

According to The Spun, playing for the Ravens will tap Robinson’s potential with Lamar Jackson playing as the team’s quarterback.

Robinson's addition will also provide options for John Harbaugh's wide receiver depth, which has been weakened by the departures of Marquise Brown to the Arizona Cardinals and Sammy Watkins to the Green Bay Packers.

Robinson, as a six-year NFL veteran, will likely to mentors Ravens’ other receivers with a lack of experience in the NFL. Currently, there is no player who has more than two years of playing on the team’s roster.

Robinson will need to compete to secure his spot as the first option and face challenges from Rashod Bateman, Tylan Wallace, Devin Duvernay, and James Proche II in the wide receivers’ depth chart.

With Proche and Wallace injured, the former Florida Gator player will have a bigger opportunity as Ravens’ receiver, but, he might not be listed as a starter, according to Pro Football Rumors. Otherwise, Robinson can guarantee the Ravens’ play behind Duvernay and Proche.

With the salary cap space remaining under $9,5 million, that leaves plenty of room for Robinson's addition, but it is reported that the deal likely would not be as much, according to sources.

Several wide receivers have shown up at training camp so far, including Bateman, who is listed at 6-foot-1 as the team’s tallest receiver, and probably will become Ravens’ first choice.

Moreover, there is no confirmation on Robinson to play for the Ravens against the Cardinals on Sunday, August 21.