Travis Hunter, the No. 2-ranked recruit cornerback, announced Wednesday that he had signed a deal with Jackson State. His move from Florida state saw him becoming the first five-star high school football prospect to sign with an FCS team since ESPN started its rankings in 2006.

Previously, Pro Football Hall of Fame defensive back and Jackson State coach Deion Sanders promised before the start of the early signing period that he was going to make a historic signing, and now it has been revealed to be Hunter's move from Florida to Jackson.

Jackson State won its first SWAC title last month since 2007. The university is one of the oldest members of the Southwestern Athletic Conference. 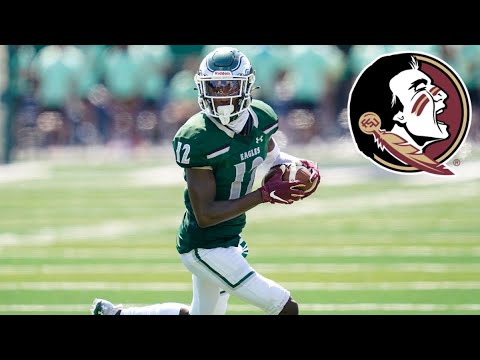 The 6-foot-1, 165-pound Hunter is a graduate of Collins High School in Suwanee, Georgia. He had been committed to Florida State since March 2020.

"Florida State has always been a beacon for me," Hunter said on Twitter on Wednesday. "I grew up down there, that's where my roots are, and I never doubted that I would play for the Seminoles.

"It's a dream that is hard to let go of, but sometimes we are called to step into a bigger future than the one we imagined for ourselves. For me, that future is at Jackson State University."

Hunter' appeared to be enthusiastic during his signing ceremony, throwing three baseball caps on the table in front of him before making his announcement, titled "Florida State, Auburn, and Georgia".

After tossing them off the stage one-by-one, he unzipped his sweatshirt and revealed a T-shirt with the word "Believe". A Jackson State cap was then tossed to him from the crowd. He caught the cap, with a dark blue J on a white background, and put it on.

Previously in October, Hunter visited Georgia during his recruiting process, Rumors then spread that he was intending to move to the Bulldogs. Hunter denied the claims, saying that he was a Seminole and was not planning to join the Bulldogs. Hunted then visited Jackson State in November to watch their win over Alcorn State.

According to Hunter, among the many reasons he made the move were "Jerry Rice, Doug Williams, and of course the legend, JSU's own Walter Payton."

"Historically Black Colleges and Universities have a rich history in football," Hunter said on social media. "I want to be part of that history, and more, I want to be part of that future. I am making this decision so that I can light the way for others to follow, make it a little easier for the next player to recognize that HBCUs maybe everything you want and more.

"I look forward to working with the iconic Deion Sanders, and especially my fellow Tigers."

Who else is coming