Cleveland Browns Myles Garrett has addressed the upcoming match against his former teammate, Baker Mayfield, who now plays for the Carolina Panthers. Garrett said there was “no rivalry” between him and Mayfield.

“It’s my former teammate but there’s no rivalry there between me and him and there’s no rivalry between the Panthers and the Browns,” Garrett told reporters on Tuesday. “Yes, he was here, but that doesn’t mean I have an added sense of urgency to get to him.”

Garrett said that instead of being worried about meeting Mayfield, the defenseman was more focused on helping Cleveland win the game. He added that he was “happy” Mayfield was selected as a starter for the Panthers over the usual starting quarterback, Sam Darnold. 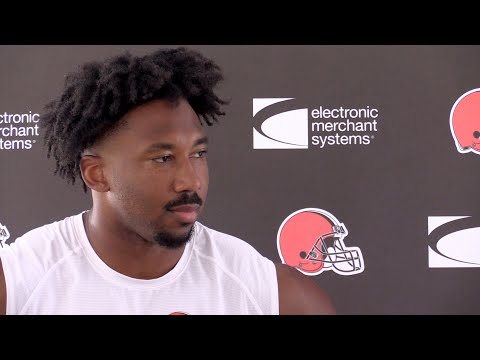 On the other hand, Mayfield said that the Browns had “disrespected” him following his trade because he thought the team “told one thing and they completely did another”. Cleveland traded away Mayfield to acquire Deshaun Watson, and the quarterback said he was not fully aware of the specifics of that contract.

With the NFL regular season starting in a couple of weeks the sportsbooks have started to ramp up their offerings. To mention a few there are some nice odds boosts from Fanduel and Draftkings where you only have to bet as little as $5 and get $150 or $200 in free bets. Check them all out in our guide to the best NFL sportsbook bonuses and promo codes.

Previously, Browns' general manager Andrew Berry said that he regretted the way Mayfield-Watson's trade ordeal took place. Berry said, “If there’s probably one thing that I would regret or kind of go back [and do] differently, when [Mayfield] had been notified that we were one of the teams that Deshaun wanted to meet with, late that Monday night, we set up the visit.

“I had set up a call for Baker’s representation the following morning. The news got out before I was able to make that call.”

Garrett and Mayfield spent several years together after the latter joined the Browns in 2018. They led the team to enter the first playoff after many years in 2020. Garrett complimented Mayfield who played most of the 2021-22 season with an injury in the left shoulder.

In his last game with Cleveland, Mayfield was sacked nine times during an away game against the Pittsburgh Steelers. The Browns were defeated 26-14. Mayfield’s injury prevented him from participating in the final of the season where the Browns faced the Cincinnati Bengals.

The Browns are scheduled to play the Panthers on September 11 season opener at Bank of America Stadium, Charlotte, NC. In the last two preseason games, Cleveland won over the Jacksonville Jaguars but lost to the Philadelphia Eagles. Meanwhile, the Panthers were defeated by the New England Patriots but won over the Washington Commanders.

On the quarterback’s side, the Browns must let go of Watson for at least 11 games after the player received a suspension from the NFL over an alleged legal issue. According to reports, the Browns will likely choose Jacoby Brissett as the starting quarterback. Joshua Dobbs reportedly will play as a backup for Brissett.

Amari Cooper, David Bell, and Donovan Peoples-Jones are among the starting players for the offensive line. Meanwhile, Jordan Elliot and Taven Bryan will play alongside Garrett in the defensive line. Starting right cornerback Greg Newsome II’s participation remains unclear and will probably be replaced by the second person on the depth chart, Martin Emerson Jr.

Last season, Cleveland finished third in the AFC North, recording 8-9 or .471 PCT. In ESPN’s future rankings released last July, the Browns were within the top 10.