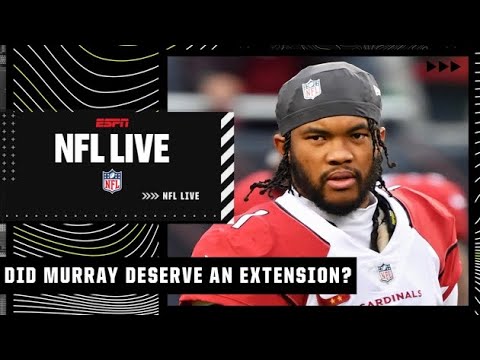 Kyler Murray has agreed to sign a new contract with the Arizona Cardinals, keeping him with the team until 2028. The mega-deal included a five-year agreement worth $230.5 million, with $160 million guaranteed, making Murray one of the highest-paid players in the history of the NFL.

The newly-agreed contract is a huge boost for Murray, making him the second highest-paid quarterback in NFL history, trailing only Aaron Rodgers, who inked a contract extension with the Green Bay Packers that pays him an average of $50.27 million.

This ends the speculations regarding Murray’s future with the Cardinals. In February, Murray deleted all references to the team on his social media accounts. The 24-year-old quarterback was also not seen in the team’s voluntary OTA in May.

Cardinals general manager Steve Keim has said that the club had no intention to trade the player, saying he was a key figure on the team.

"The way we have approached it is we have free agency, we have the draft, and then we will take a deep breath and sort of refocus," Keim told ESPN.

"That's sort of the reason every other player that has been a third-year quarterback has been (extended) in the middle of the summer or late summer. It's no different for us. Nothing has changed in terms of him being our long-term and short-term quarterback."

Murray himself has hinted that he wanted to stay longer with the Cardinals. Earlier, Patrick Peterson and Chase Edmond said on the All Things Covered podcast that Murray had not much time left on the team.

"I wanna win Super Bowls with the Cardinals, AZ is home," Murray wrote on Twitter in response to the comments.

With the off-field thing being taken care of, the Cardinals and Murray can set their focus back on the field. The team is hoping to secure another postseason spot in two years after making it for the first time in six years.

The Texas-born quarterback has been an important element for the Cardinals in the last three seasons. The Cardinals missed the 2020 playoffs after losing six of its last nine games due to Murray being injured throughout the second half of the season.

Murray has managed to secure some individual honors such as Offensive Rookie of the Year. He was selected to the Pro Bowl in each of the last two seasons. Murray has a combined record of 22-23-1, having thrown for 11,480 yards and 70 touchdowns.

Murray recorded 34 interceptions with a completion percentage of at least 70 percent in his first three seasons while adding 314 career rushing yards and 20 career rushing touchdowns to his name. According to ESPN, he is the first player in NFL history to do so.